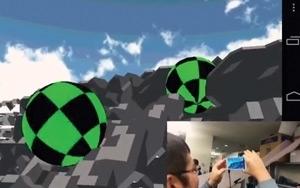 Reports suggest Google is developing a tablet with advanced vision capabilities as part of Project Tango, a smartphone project by the company's Advanced Technology and Projects group (ATAP), a former division of Motorola. The goal of the group is to develop mobile technology with enhanced robotics and computer vision to provide a human-scale understanding of space and motion.

The technology tracks motion in 3D to give us a better understanding of space through sensors in mobile devices like cameras and features in a smartphone that can identify more than a quarter of a million 3D measurements per second, updating the position of the phone. Several applications could apply this technology, from drones that fly to Google Maps to features on smartphones and tablets that allow people to visualize the world in 3D.

Google plans to produce 4,000 prototype tablets next month capable of using cameras and sensors to map the world, per the Wall Street Journal. The tablets will have a 4-megapixel camera, and combined RGB and infrared sensor displaying images on a 7-inch screen through a back-mounted camera. No doubt search will become a major feature of the devices. Not traditional search, but the computational capabilities within the devices -- and let's not forget about the possibilities in gaming.

In the U.K, marketers can add another 24.6 million people -- more than one in three consumers in the U.K. will use a tablet at least once monthly, up 22.9% compared with the 20 million in 2013. By 2017, the tablet will become a mass-market device, with more than half the U.K. population using one at least once per month, per eMarketer.