Soft Pedal: How Brands Are Helping Pro Cycling Win Its Own Race

PASADENA, Calif. -- Amid the mainly cycling-related booths surrounding the perimeter of the finish line at the big Amgen Tour of California bike race here, it was an entertainment marketer, 21st Century Fox, that had the longest lines.

A mob of fans, hangers-on, and local bike race teams ambled around the booth, located directly in front of Pasadena City Hall and in sight of the finish line of the seventh stage of the eight-day event for a chance to win -- not a race -- but DVDs of Fox films such as “We Bought a Zoo.”

“DVDs? What century is this?” a member of the UCLA bike team said sarcastically, as fans spun a roulette wheel for a chance to win one of the movies. Clearly, he didn't realize the connection -- or perhaps, the irony.

A year ago, just before the Tour de France, 21st Century Fox struck a sponsorship deal with U.K.-based Team Sky, the chief benefit of which was that its name was displayed on the back of riders cycling shorts. News Corp. and its subsidiary Sky Italia have been partners in Team Sky since the team first raced in 2010.

In 2013, 21st Century Fox became a separately traded company, encompassing just the TV and film companies of the former News Corp. Another new entity called News Corp. was created to be the home of its print businesses, including newspaper and magazines.

Fox is now co-sponsor with the European satellite TV broadcaster, BskyB of the U.K.-based Team Sky, the team that won the Tour de France the last two years: first with Bradley Wiggins in 2012; and then with Chris Froome in 2013. They were the first and second ever British winners of the big three-week race.

This year, 21st Century Fox plans to be a more active sponsor, including stepping up its presence in local races like the one it hosted here at the Amgen Tour of California. Using its big Hollywood PR machine, Wiggins made a number of TV appearances for the team for the California event. Publicity shots also included Team Sky on the Fox studio lot.

Now in its ninth year, the Amgen Tour of California continues to improve its association with sponsors. Ten core sponsors and 15 overall marketers now participate in the tour.

“There is such an affinity in this sport when it comes to brands,” says Nick Baker, senior vice president of global partnerships at AEG, the big entertainment and sports venue owner, including L.A.’s Staples Center. AEG, which also owns sports teams and entertainment tours, has owned and operated the bike race since 2006.

What makes cycling sponsorships unique from other live events, Baker says, is the close local associations that companies received for their brands.

“They are extremely committed to the sport and communities,” he notes, pointing out that the tour generates $100 million in annual value to host cities.

The newest tour sponsor, Coca-Cola, is a longtime sponsor of AEG’s Staples Center, as well as other global events. Going forward, AEG’s Baker feels the tour can pull in more major AEG sponsors because of the fans it attracts: mainly high-income males, and hardcore local community bike fans.

The event’s title sponsor, pharma marketer Amgen, is known for its cancer treatment medicines and other drugs, and leverages the bike-racing association via its “Breakaway from Cancer” branding campaign.

“This premiere race provides Amgen the opportunity to raise awareness of some of the world’s most serious illnesses,” states Ray Jordan, senior vice president of corporate affairs at Amgen, “such as cancer and cardiovascular disease, and to connect with patients through programs running in tandem with the race. Our sponsorship also allows Amgen to make real impact.”

Metaphorically speaking, professional road cycling appears to be winning its own race once again, following the negative fallout surrounding the use of performance-enhancing drugs by some of its most celebrated athletes, especially Lance Armstrong.

A 2013 report on cycling sponsorship from Cycling News found that TV sponsorships in 2012 generated $2.1 billion worth of media and marketing value. For sponsors, the return on investment for each marketing dollar spent on cycling was estimated to be $5.40.

The report also found that the average World Tour Team generated an estimated $88.4 million in media value. And it seems to be growing. In 2012, there was a 54% increase in the number of TV hours broadcast, 68,000, across 175 countries.

While Baker says the Amgen Tour of California has made gains in terms of the kinds of brand sponsor deals, two major sports brand categories are still noticeably missing from: automotive and a financial services.

“We are in deep conversations,” Baker confides.

In the past, the tour has had sponsors such as car maker, Nissan and European-based bank, Rabobank. The later was the longtime title sponsor of the World Tour Netherlands team. Nissan has also been a sponsor of a cycling team, along with RadioShack -- the last team Lance Armstrong rode for.

Although the eight-day road bike tour, which features World Tour cycling teams and top road cyclists, still loses an estimated $1 million a year, executives say that is a big improvement from earlier losses of around $10 million annually.

NBCSN (the former NBC Sports Network) has aired the weeklong race since its inception. Although small in terms of TV viewership compared to bigger TV sports franchises the network airs -- the NHL, U.K.'s soccer Barclays Premier League -- the bike race has been growing.

On-air brand association and TV product placement is a key part of cycling's long history. Companies still count on the sport's original marketing tool to connect with and engage consumers -- what people on Madison Avenue might 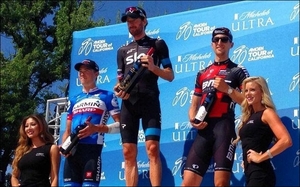 Even a rival TV network’s brand name can sneak into an unusual place in this competitive sports marketing world.

In a live, post-event TV interview Bradley Wiggins, the 2014 tour winner was wearing a traditional short-beak cycling cap with the brim tipped up displaying his sponsor’s name for the NBCSN television network viewers to see.

It said: “21st Century Fox.” Some may think Fox in giving away DVDs in this modern digital age is a bit antiquated, but a strong marketing awareness is clear to see.