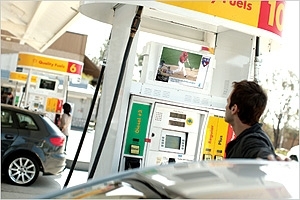 ew Godzilla ad has started running on TV screens nationwide. But thousands of those screens aren't in front of a sofa. They are mounted on gasoline pumps run by Outcast Media, which programs and handles advertising buys and placement on its network of some 21,000 gasoline pump TV screens in 135 DMAs.

In January, the company was acquired by Greensboro, N.C.-based fuel dispenser and integrated fueling company Gilbarco Veeder-Root. Gilbarco says the deal will take Outcast from its reported 36 million viewers per month to 100 million in two years, thanks to the 60,000 additional retail fueling stations and a piggyback on Gilbarco's own growth plans.

Nathan Gill, co-founder and CRO of Outcast Media, says Outcast is more an extension of traditional TV than a digital play with scale on par with prime-time show reaching consumers that have an automotive mindset. He says the appeal to automakers is that a gas-pump buy reaches (obviously) only drivers and, therefore, consumers who are driving age or older. And probably people driving to and from work. "They are driving 50% more than the general population and are 4.5% more likely to be looking for a new vehicle," he says.

But it's also as expensive as TV, although it's treated as a video buy, per Gill. The benefit is the captive, hard-to-reach audience. "They are commuting, working longer hours, out and about and watching less TV; they are watching less traditional media. So they are hard to get in front of."

Birmingham, Mich.-based Gas Station TV (GSTV), which reports 45 million viewers per month, ran its own Fiat campaign last December. Interpublic's UM handles media for Fiat. GSTV said the ads garnered 60% recall, with 45% of it unaided (per Lieberman, which it contracted for the study.) The difference with GSTV's campaign was that it was custom-made for the pump experience, as it featured a Fiat fan inside the screen gazing out and hoping for an encounter with one of the cars.

“Brands now realize the importance of diversifying their media mix and exploring new avenues, including video at the pump, to reach their target audiences,” said Denise Smith, SVP, group media director at UM, in a statement about the campaign released around the time it launched.

Gill says that in addition to running a Tier 1 national-campaign creative on Outcast, auto marketers like the network for lower-tier local market advertising with sales event messages, as well as messages about fuel efficiency -- a pitch that makes obvious sense. The other growth area is dealer parts and services. "Lots of OEMs want to make sure owners are using their service centers."

He says 75% of the Outcast Media drive-in audience is 18 to 49 years of age; 82% are employed; and half are college grads. The average household income is $83,000. "What you see there is a function of the fact that these people are driving to work every day."