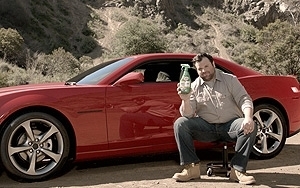 Seven in 10 car owners who care about their car's appearance also enjoy taking care of their car.

These individuals are the targeted recipients behind Turtle Wax's estimated $4 million integrated marketing campaign to support both the Turtle Wax brand and a variety of new products.

Developed by its new agency of record, O'Keefe, Reinhard & Paul (OKRP), "Get Out There And Shine" features a series of films seen through the reflection of a shiny car. The ads are meant to demonstrate both the attributes of Turtle Wax's products and the thrill of having such shiny cars that its core audience craves.

These films are currently airing on the Hulu network, with plans for additional digital networks to follow.

In addition to the films, the agency is introducing #Reflectie, a social-media sweepstakes promotion — managed by the Zeno Group — that invites fans to shoot #Reflectie of themselves in the reflection of their cars and then share them across a wide variety of social channels. These participants will also have the opportunity to enter a sweepstakes for a chance to win a 2015 Ford Mustang.

“Simple humor combined with a reflective technique is what makes ‘The Man in the Reflection’ such a refreshing concept for the Turtle Wax Brand,” explained Matt Reinhard, Chief Creative Officer, OKRP. “Not only is reflection a highly engaging visual meme, it also demonstrates product efficacy and the end-benefit for consumers.”

Collectively, this campaign is different from previous efforts offered by the brand; this is an integrated effort that encompasses a branding platform first (which is new for the brand) and utilizes film and video to tell the brand story. By comparison, its most recent past efforts have relied mostly on social channels.

Looking forward, Turtle Wax says it will evolve the campaign based on consumer reaction and has designed campaign elements for this adaptable growth. Thus far, executives are pleased with the early results on the contest and #reflectie social media outreach.

Chicago-based OKRP open its doors last year and is backed by Interpublic Group, which has a minority stake in the agency.