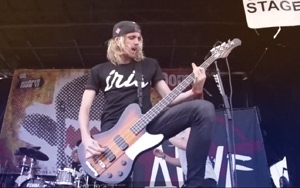 It's summer. No school, no homework, no problems, a pizza delivery job and lots of freedom. Time to hit the music scene. The Vans Warped Tour is about to kick off its 20th anniversary tour this summer. The organization that runs it and several other tours, Nashville-based 4FINI, says some 100 artists will be involved, with 30 bands on five stages at each of the 40 cities the tour hits. Along with Kia, for which 2014 will mark its seventh sponsorship year, there are some 42 brands involved at different levels.

Q: Your new sponsorship deal is with the Journeys retail chain. What does it entail?

A: Journeys sells Vans shoes and has been interested in us. Vans called and said there's an opportunity because (apparel company) Tilly's had left as sponsor. Journeys is based in Nashville, and I have an office there. We worked out the three-year deal as presenting sponsor. And we will have much more of a retail presence with them.

Q: What are some of the early activations?

A: The deal was just completed about the first of March. We put the deal together and immediately started ramping up to the point they have in-store presence at all retail locations, including festival wear, and staff wearing shirts provided to them as uniforms for the month. They really immersed in a very short time. While they were finishing the deal, they dropped 1.5 or million catalogues. In a short amount of time, we got a lot done,

Q: What are the levels of sponsorship at Vans Warped Tour?

A: We can do anything from very small endemic deals with startup companies to our larger deals with brands like Kia and Monster, and carve out a presence in the tour that's exclusive to them, including more of an online presence. We are looking for long-term partnerships, though.

Q: What is the tour schedule this year?

A: We are in 43 cities in North America; we did eight cities in Europe this year; and we did four in Australia. We are also doing a spinoff, Road to Warped, starting in Alaska. We get about 13,000 people per show in North America. We are on track to do about 550,000 tickets.

Q: What's the competitive landscape and who is your audience?

A: When I started years ago there really weren't many festivals. But now in a landscape full of festivals, we really gear to the 13- to-19-year-old. If you bought a ticket online right now, with fees, it's about $42 for a nine-hour festival, so it’s very affordable. But in the past couple of years I've looked at 24- to-27-year-olds, who are paying their student loans back and in their first job. That $40 ticket price becomes appealing to them, too. We have been able to go back and book bands that might be relevant to them, and we have seen an influx. To skew the audience younger, we let parents in for free.

Q: Do participating consumer brands like to connect with the artists for marketing programs during the tour?

A: The ones that have the budgets, yes. We put the deals together and don't use outside sources. We will ask the brand which demo they are trying to get at. For example, we just did a deal with Kotex for 10 shows, and they wanted female-oriented artists. And we are doing the connecting. The manager will say, for instance, it's a grand per show for signing. We will cut the deal, and out of our deal we will cut the artist a check. We will give the brands a list of five or six bands and they come back and tell us who they want to work with.