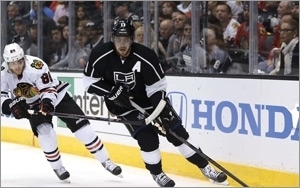 Let us dwell on things gelid. Like ice, and games you play on it. We are, after all, in the midst of the Stanley Cup Playoffs, and Wednesday night’s game was between the L.A. Kings and Chicago Blackhawks on the Blackhawks' home pitch.

That's tough for the Kings and not just because they have to sleep in a hotel. The Blackhawks follow only the New York Rangers in team loyalty, says New York brand consultancy Brand Keys. According to Sports Business Daily, the Blackhawks averaged 21,569 attendees to home games on average, putting United Center at 109% of listed capacity.

Brand Keys, which polled 150 fans in each of the teams’ own DMAs, said the Bruins are tied with the Blackhawks in loyalty. The San Jose Sharks are third, followed by the Pittsburgh Penguins, the Detroit Redwings and Philly Flyers. The St. Louis Blues are number six in the ranking.

The firm identifies four drivers for loyalty: the "pure entertainment" value around how well a team does and how exciting they are to watch; "authenticity" around how well they play as a team and whether fans show up to root for the home team; "fan bonding" around players that are particularly respected and admired?; and history and tradition.

“Rule-of-thumb is that win-loss ratios can contribute up to a 20% bump in a team’s loyalty," says Brand Keys CEO Robert Passikoff in a statement. He says the win-loss and attendance numbers have a bigger influence on loyalty than they do in other sports partly because "the sport moves faster than the others, so more attention is necessarily paid to the 'pure entertainment' driver where wins and losses reside." He says that for the NHL, “the 'authenticity' driver correlates very highly to at-home attendance figures, and makes a slightly higher contribution to engagement and loyalty than for the NFL, MLB or NBA."

The teams with the least fan loyalty are the Buffalo Sabres, Tampa Bay Lightning, Winnipeg Jets, Phoenix Coyotes, Columbus Blue Jackets, and, in last place, the New York Islanders. Still, the Islanders weren't on the bottom in at least one respect: Sports Business Daily reported that the Coyotes had lower attendance numbers -- the lowest in the league -- with 13,776 fans per game.

Brand Keys says that of the four major sports it tracks for its Sports Fan Loyalty Index, the National Hockey League is last again this year. The National Football League is currently #1, followed by Major League Baseball, with the National Basketball Association in third place.