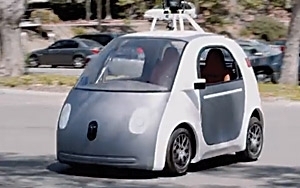 Google has begun to build 100 prototype self-driving cars that it plans to begin testing this year in an effort to reengineer transportation. Marketing and advertising executives have mixed thoughts on whether they will make the purchase.

Today, the electronic cars have a maximum speed of 25 miles per hour and lack a steering wheel, brakes and gas pedal, but come equipped with sensors to remove blind spots and software designed to help them steer clear of accidents. The passenger has a button to push that stops the car in case of emergency.

"If all goes well, we'd like to run a small pilot program here in California in the next couple of years," Chris Urmson, director of the self-driving car project, wrote in a post. "We're going to learn a lot from this experience, and if the technology develops as we hope, we’ll work with partners to bring this technology into the world safely."

Magnetic CEO James Green would purchase a Google self-driving car "in a heartbeat" because commuters on trains and buses can multitask, whereas those in cars cannot.

Apparently, marketers are either in or out. Suzy Sandberg, PM Digital president, wants in -- although she finds the self-driving car "pretty spooky" and thinks that train left the station with Google Glass. Knowing her lifestyle she would likely buy one because she spends hours running errands and would likely send the car around town to do them for her. "I am sure many stores would adopt a 'pack-the-driverless-car' amenity, akin to ordering online and pick-up in store. I would use this to the max," she said. "When my kids fight about who needs the car, it would drive one and then the other."

Frequent travelers who sometimes fly out from one airport and in to another would no longer need to worry about how to get to and from different airports. Sandberg could send the car where it needed to go next, including home to eliminate overnight or long-term parking costs at airports.

Since Rob Griffin, Havas Media EVP of global head of digital, remains too technology-reliant, he would wait for the next-generation product. There are always exceptions, but he doubts this is one. He will upgrade Apple computer equipment early to play, but will wait for the iPhone OS upgrades to review kinks and patches first. "When my buddies stop bitching, I upgrade," he said. "I put a car in the phone bucket. It has to just work. Plus, until Mercedes diesel goes there, I am out."

Griffin's out until the second release version. Motivity Marketing Founder Kevin Ryan wants a manual override button, which the car offers. "Even the Starship Enterprise had a manual override," he said. "If Google wants to really market this they should break away from the traditional Google-centric approach they seem to have with everything they do."

Ryan believes companies should not enter a new market with an "infallible" attitude, where company executives think they can do no wrong. "The unapologetic all mighty entity approach works when people don’t have a lot of choices like, for example, buying search ads, but for something like this, they need a whole new look, feel and attitude," he said.

cars, google, self-serve, technology
4 comments about "Google's Self-Driving Car - And Marketing Execs Who Will Or Won't Buy One".
Check to receive email when comments are posted.
Read more comments >
Next story loading