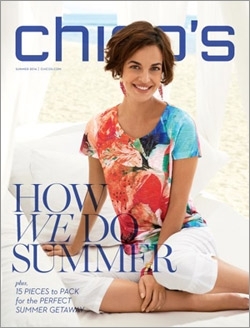 Chico’s is pruning its marketing mix and rethinking store growth, as it continues to woo America’s older woman.

The Fort Myers. Fla.-based retailer says its first-quarter net income fell to $39.9 million compared with $51.7 million in the same period last year -- below expectations. Net sales hit a record $681.6 million for an increase of 1.6% compared to $670.7 million, fueled by new store openings. On a comparable store-basis, however, sales declined 2.6%, “reflecting lower average dollar sales,” which CEO David F. Dyer attributes to both lousy weather and a more promotional environment.

Based on the current business environment, the company now says it plans to open 107 new stores this year -- not the 120 and 130 it had previously announced -- and that it aims to keep marketing spending flat. “The things that drive sales and the things that touch the customer we’re continuing to spend money on,” he told investors during a conference call to discuss earnings. “The things that are back-of-house, that we think we can either delay or cut, those are where we’re taking the serious looks.”

The company currently has about 1,500 stores. In addition to its flagship brand, which appeals to women 35 and older, where same-store sales fell 1% in the quarter, it also operates Soma Intimates, which had a same-sales increase in the high single digits; White House | Black Market, where sales fell 8.6%; and Boston Proper, which it is in the process of expanding beyond its Florida base.

But as the weather has improved, so have sales, and it says its still-unaudited second-quarter sales are up 5%, with same-store sales up 1% through Memorial Day.

Part of the company’s omnichannel initiatives, he says, is an expanding test of iPads in boutiques, which “has been very promising as we empower our associates with our customer’s purchase history and personalized suggestive selling options, enabling associates to create an impactful assortment specific to each customer’s wants and needs.” He says the iPads have been rolled out to top stores, with plans to expand even further in time for the holidays. It also provides tech tables in Boston Proper, which currently account for about 20% of sales. And it’s testing them at White House Black Market.

But the category, which includes rivals J. Jill and Talbots, is a difficult one: Last month, competitor Coldwater Creek filed for bankruptcy.

Dyer says that while the company is doing well at attracting shoppers and getting her into stores, “what’s happening is she’s not spending as much. Our transactions are even slightly ahead, when you look at it for a total company. The entire sales decrease can be attributed to average unit retail, which basically says that you’re in a very promotional environment.”