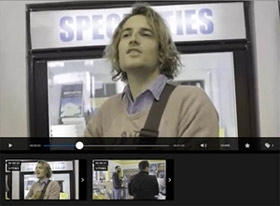 The technology aims to create interactive videos that produce revenue streams for publishers.

Tap on the video screen with a finger or a mouse and the technology creates a bookmark that viewers can click on to see more information about a product or service. The technology layers on top of any existing streaming media, per Wilson. The bookmarks detail everything the brands want to draw in consumers -- from the DKNY top to the pants and purse, even the music in the video.

The video keeps playing until the viewer physically taps the stop button. Engaging with the bookmarks means swiping up or tapping the bottom of the video unit to reveal the content. Early tests show clickthrough rates of more than 50% by viewers creating bookmarks. "It sounds like a really high rate, but that's what we see," Wilson said.

Revelens has plans to provide a commerce feature allowing companies to track video clicks to online sales, but it's a little more difficult problem to solve. "We just want to get the player off the ground first," he said.

The technology will debut in early June on TheInfluence.com, a celebrity and influencer site. The site will start with five videos, each featuring a well-known celebrity. Wilson said the launch with a Web-based TV show and network are scheduled to follow.

While Wilson explains that forthcoming media clients are scheduled to launch the platform, he said there are benefits for universities and higher education with a focus geared toward online learning. "Imagine you're watching an online course, you can tap or click on the screen when confused about certain points the professor makes while going through the curriculum," he said. "You can come back later to research those points."

Former Disney and Fox marketing executive Oren Aviv has signed on as a board member, along with Nanigans cofounder and CTO Claude Denton.