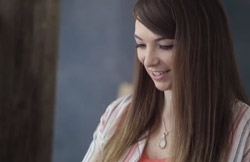 The unveiling of the long-rumored Amazon smartphone appears to finally be at hand. Invites sent out Wednesday for a special launch event on June 18 in Seattle were paired with a teaser video showing first-time users reacting to a device just offscreen. Their awestruck expressions and awkward body language suggest they are trying to trigger the phone’s rumored 3D “holographic” display.

It's not quite the same as a post-Super Bowl segment on “60 Minutes,” but an effective bit of marketing in its own right.

The video by Friday was approaching 1.5 million views on YouTube. Whether consumers in the wild will respond as effusively, of course, will not be known until it hits Amazon.com or the retail shelves of a carrier partner.

Beyond the novelty of a 3D screen, one thing that could make an Amazon device appealing is the price. The company will likely follow its strategy of selling premium products priced for the masses. In a research note Thursday, Macquarie Securities analyst Ben Schachter predicts the price will likely undercut most current high-end handsets, including the iPhone 5S and Galaxy S5.

But to compete with the entrenched smartphone players, Amazon will likely have to add more sweeteners. One might be bundling its phone with a new Amazon Prime offering. “The pitch would be that Prime + Phone = 2-day shipping, videos, books, apps, along with voice, data and text,” wrote Schachter. “If the price point is low enough, it could drive more uptake of Prime by a lower-income demographic.

A separate rumor has it that Amazon will release two phone models -- a less expensive model, like the Kindle Fire tablet, and a high-end device designed to rival the iPhone and top Android smartphones.

Regardless, Macquarie also suggests Amazon might work with a carrier (or more than one) on an MVNO-style distribution model in which it would wholesale bandwidth and bundle it with its phone. “This would enable Amazon to subsidize a data/voice plan if it wanted to drive more Prime/and or overall Amazon ecosystem users.”

Offering a cheap data plan along with a low-cost smartphone could help further differentiate Amazon in a crowded field. Given the competition, the company will have to pull out the stops to carve out any share in the smartphone market dominated by Apple and Samsung/Google.

Taking a step back, why is Amazon introducing a smartphone at all? No one’s clamoring for one anymore than they were for a long-rumored Facebook phone. According to Schachter, it’s all about The Great Ecosystem War. “Phones represent yet another front in this war,” he stated. “While Apple and Google are the clear leaders today, this is going to be a long, hard war with many battles.”

Realistically, Amazon can’t expect to make much of a dent against Apple, Samsung and other big manufacturers. But it wants to add a “Kindle” smartphone to extend its hardware lineup of e-reading, tablet and streaming devices to help sell its vast trove of digital and physical goods.

It also gives Amazon a new weapon for infiltrating brick-and-mortar stores. Physical retailers won’t be pleased with the idea of customers showrooming in the aisles with an Amazon phone in hand. They can only hope their arch rival’s handset turns out to be little more than a novelty itself.