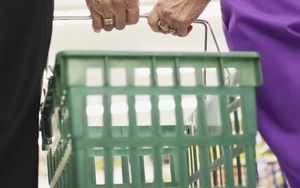 As in other aspects of commerce, consumers are looking to lean on mobile to aid in their grocery shopping.

We know from numerous studies that mobile shoppers in general want to go to physical stores to shop. It turns out that grocery stores are in the same boat, with most (83%) shoppers considering traditional grocery stores as a preferred shopping location, based on new research.

Grocery shoppers also have some of the same wants as mobile shoppers at general merchandise stores. Nearly 60% see custom coupons, such as those delivered digitally to their mobile phones for products they buy or may be interested in, as the best way to simplify their future shopping, according to a survey of 1,000 U.S. shoppers between the ages of 15 and 85 by PwC as part of its experience radar series.

For marketers focused on interacting with mobile shoppers, the most significant factor in where those shoppers can be reached is mostly based on where they live.

Mobile shoppers continue to be drawn to deals, and grocery looks like no exception.

While the majority of shoppers (68%) said the most common feature that drew them to a particular grocer was being close to home, 67% were being drawn by competitive prices, 44% by fresh produce and 30% by specialty products.

In-store mobile interaction also has the potential to engage shoppers and bring them back.

The study found that most (52%) shoppers are drawn back to a particular grocer by the in-store experience and 26% are drawn back by other services such as express checkout and curbside pickup.

As yet another indicator of the mobile commerce growth direction, more than half of shoppers want to integrate their mobile devices into their future grocery experience.

A majority of shoppers named mobile integration as the most desired in-store feature and the preferred way to engage away from the store.

Shoppers prefer using their personal mobile devices over in-store technology and most (80%) of shoppers would use their own mobile device for grocery lists and if they were to order groceries online in the future, three quarters would want to do it with their own personal device.

Mobile is becoming part of the grocery shopper’s list.