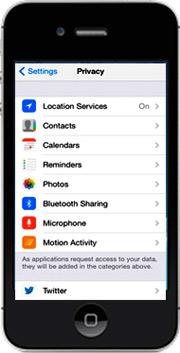 Apple's upcoming operating system could prevent analytics companies from tracking iPhone and iPad users in brick-and-mortar stores, according to a privacy presentation given at the Worldwide Developers Conference.

The company said in the presentation that iOS 8's WiFi scanning will use “random, locally administered MAC addresses,” instead of the permanent MAC addresses. The move is significant because the retail analytics companies that track shoppers in stores do so via their devices' 12-digit “media access control” (MAC) addresses -- identifiers that are broadcast when users turn on WiFi or Bluetooth.

Apple didn't respond to a request for comment for this article.

Observers say the change could put a big crimp in companies' ability to track brick-and-mortar shoppers who use iPhones and iPad devices. “It's likely to siginificantly affect companies that are tracking Mac users,” says Jules Polonetsky, executive director of the industry-funded think tank Future of Privacy Forum.

The move comes as Apple is rolling out its own iBeacon technology -- a Bluetooth low-energy based system that enables smartphone users to interact with sensors in stores.

Apple's news comes several months after the Future of Privacy Forum moved forward with a privacy initiative aimed at enabling consumers to opt out of location tracking. The group launched a Web site, www.smartstoreprivacy.org, where consumers can reject location-tracking by entering their devices MAC addresses.

The data is only presented to retailers in aggregated form, but the technology is controversial, with some observers saying that consumers don't expect that their phones will be used to track them. Sen. Al Franken (D-Minn.), who often expresses concern about potential privacy violations, has said that location tracking should require users' opt-in consent.

Justin Brookman, head of consumer privacy for the digital rights group Center for Democracy and Technology, praised Apple's decision. “Obviously, there's been a lot of concern about using WiFi probing signals to track phones in unexpected ways, so it's gratifying to see them respond to the concerns of their customers,” he says.