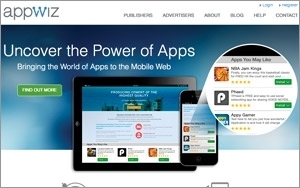 Mobile apps dominate media consumption on smartphones and tablets, but the mobile Web still accounts for 14% of total media activity on mobile devices, according to figures from Flurry -- while comScore predicts that mobile is poised to replace desktop access to the Internet this year.

Although there still aren’t many platforms that attempt to bridge mobile apps and the mobile Web, one start-up, Appwiz, is giving it a shot and trying to solve the problem of app discovery at the same time.

The Appwiz platform enables app creators to promote their apps on the mobile Web with targeting based on the browsing habits and content preferences of the user, according to founder Yariv Ron.

Publishers who download the Appwiz Discover widget can benefit from a boost in ad revenues, which they split with Appwiz.

On the user side, the ads are placed in a way that doesn’t disrupt the user experience, in the form of a box with icons and text offering -- for example, “apps you might like” appearing at the end of the article or piece of content. Users who click on the ad are taken to the Android or iOS store to complete the download.

Ron emphasized that the platform is most effective when app creators promote their apps based on relevance: “There is a very nice connection between people who are browsing content on their mobile devices, and the ads we show them recommending apps… Say you have a sports app, you can target specific nutrition blogs or gym sites.”

With luck, the Appwiz Discover problem will help boost discovery for app creators, whose work can easily get lost in the sea of new apps, especially without a means to target potential users based on relevant data. “99% of app developers are getting less than 50,000 downloads,” Ron noted, adding: “We can change that.”
>
apps, mobile, online, targeting
Next story loading