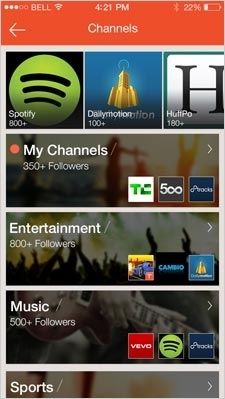 Among the top messaging apps, Tango might be thought of as the anti-WhatsApp. Unlike the famously ad-free app acquired by Facebook this year, Tango has embraced advertising, third-party content, and features like animated stickers. A recent report by IPG Media Lab on the latest wave of popular messaging apps called it the “blingiest” of the bunch.

Going further in that direction, Tango is introducing a lineup of content channels covering areas like sports, entertainment, lifestyle and humor, which it will populate with outside content from partners including DailyMotion, Vevo, Spotify, Cheezburger, AOL and 500px.

“We really see this as a new way to discover great content and bring it into your conversation,” said Eric Setton, Tango’s chief technology officer, in an interview. The move follows the company’s closing of a $280 million funding round in March led by Chinese e-commerce giant Alibaba Group. Tango claims more than 200 million registered users and 70 million monthly active users.

The new Tango Channels will focus on rich media -- videos, photos, digital music -- as well as text posts, with the ability to follow channels and share favorite stories or videos in a chat with friends. Content partners will also have the option to monetize their material through ad revenue-sharing agreements with Tango.

When Twitter-owned MoPub introduced native advertising on its platform in December, Tango was the first company to offer native in-app inventory through the mobile ad exchange. Its ad units run in its news feed, a user’s chat tab, and in profile pages.

Setton suggested that publishers would also be able to continue offering existing ad placements, with DailyMotion, for example, running pre-roll ads with videos.

“If some of them already know how to make money, we want to be mindful of that,” he said. “And if some of them are looking for ways of monetizing their content, we’ll help them do that.”

At the same time, Setton suggests the new channels will not be open to all comers. “This is not a free-for-all where just anyone can create their page or their channel,” as with Facebook, he said. Partners are selected based on quality and how they fit the Tango audience -- 70% of whom are between 18 and 44, according to the IPG report.

Even so, is there any concern with overloading the app? “As long as these are things that you opt into, these are ways of increasing or improving the experience you have on Tango,” said Setton. Based on its existing integration with Spotify, for example, he said people that share music clips end up being engaged overall on the platform.

Sounds like Tango will keep heading the opposite direction of WhatsApp, wherever it leads.