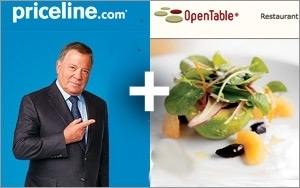 The Priceline Group has agreed to acquire OpenTable for $103 per share in an all cash transaction valued at about $2.6 billion. The deal, announced Friday, will move the company into restaurant marketing and will strengthen its position in mobile and search. The company will continue to operate independently.

When the deal closes, Priceline will focus on international expansion, demand generation and marketplace innovation, especially in mobile, said Darren Huston, president and CEO of The Priceline Group, during a conference call outlining the acquisition.

Huston believes there is "tremendous" potential to enhance the entire experience in accommodation and restaurant businesses, especially in mobile. It's the same customers. Travelers are diners, and there is an opportunity to cross-promote the services to the same customers. "We think we're strong in demand generation, and think this is another important leg of the stool for the Priceline Group," he said.

Site search in apps and through browsers continues to gain importance for brands as the Internet expands cross-media services. eMarketer suggests that the acquisition of OpenTable extends Priceline's reach outside the travel vertical, but it also gives it a stronger foothold to compete with Google for search advertising dollars on its site.

In addition to traditional online advertising and ad targeting, OpenTable offers an affiliate program for a variety of Web sites and apps like local and Yellow Pages listings, food and restaurant blogs and online communities; magazine and newspaper media Web sites; and theater, movie or music venues.

RBC Capital Markets Analyst Mark Mahaney wrote in a research note about "price target impediments" connected to stock prices that could create a possible "deleverage in its Online Advertising line, due to increased competition for search keywords--we believe this was one factor behind its recent acquisition of Kayak," which The Priceline Group acquired in 2013 for $2.1 billion.

The boards of Priceline and OpenTable have unanimously approved the transactions, and expect the deal to close during Q3 2014, subject to the satisfaction of customary closing conditions, including the receipt of regulatory clearance.
direct response, hotels, lead generation, mcommerce, restaurants, search, search marketing, travel
Next story loading