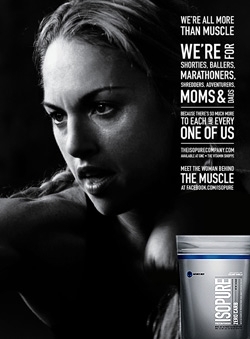 Now, it turns out that Isopure's campaign is featuring a celebrity endorsement after all.

The company lucked out by latching on to an unknown who has since grown into a well-known personality.

Heather Hardy, a single mother from Brooklyn, officially joined Isopure as a brand ambassador two years ago, and since then, has grown into a successful female boxer who recently headlined the first professional women's fight at Barclay's Center in New York City. Indeed, Hardy is undefeated as a boxer and has become a disruptor in the female boxing world.

Although the campaign's original intent to showcase regular individuals may have evolved, the message of how Isopure can change the lives of its users remains the same.

And Isopure and its Heather-starring ads remain part of an extensive print and digital media presence that is running throughout 2014. This year ads include print running in Muscle & Fitness, Flex, Muscular Development, Men's Health, GQ, Men's Fitness, Details, Shape and Muscle & Fitness Hers.