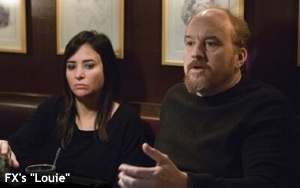 Summer’s most interesting rom-com came to an end last night with the season finale of FX’s “Louie.”

As it has done all season (and which prompts the question -- what was the rush?), FX presented two original episodes last night. They were titled “Pamela Part 2” and “Pamela Part 3,” the concluding chapters to an arc that began two weeks ago with -- wait for it -- “Pamela Part 1.” Actually, to suggest that these three episodes were somehow self contained is misleading. This entire fourth season of “Louie” mostly played as one long story that drilled deeply into the lead character’s feelings about and tentative relationships with women.

It was punctuated by two heightened arcs -- the six-part “Elevator,” which introduced Louie to Amia, a woman visiting from Hungary who spoke no English and will likely be remembered as the love of his life, and the uncomfortable “Pamela” trilogy.

Reflecting on this deep and at times very dark season of “Louie,” which has critics praising the show as one of the best things ever seen on television, I realize that -- with the exceptions of a few moments in those increasingly rare but still essential scenes in which Louie performs at his usual comedy club, and maybe a couple of the Charles Grodin moments -- I don’t think I laughed once as the entire season played out.

Instead, almost every episode made me think about what I was watching in ways that I found uncomfortable and exhaustive. I applaud the show for this -- for daring to expose certain truths about adult life that most television writers couldn’t deliver even if they tried -- but at the same time I’m glad it’s over. This isn’t summer stuff. Furthermore, as fascinating as “Louie” was this season, I began to feel that I had had enough of all of the characters on the canvas.

Anticipation was high (in ways positive and negative) for last night’s two-parter because it picked up where “Pamela Part 1” disturbingly left off -- the aftermath of Louie’s physically aggressive effort to push Pamela into finally having sex with him despite her repeatedly crying “No!” At one point in that scene he tried to pull her top off; at another she was cowering from him, disheveled and seemingly scared. Louie managed to “convince” Pamela to let him kiss her, after which she hurriedly left his apartment. Seconds later he pumped his fist in the air in a display of self-satisfaction. A heated debate followed online in which many viewers expressed their disgust over what they perceived as an act of sexual assault (repeated viewings of the scene seem to reinforce this assertion) or attempted rape.

But Louie and Pamela were very much in each other’s orbits throughout “Pamela Part 2,” which began with him asking her on a date and her agreeing to “hang out.” Their night together involved attending a bizarre exhibit at a gallery (it featured hanging neon nooses, naked men and women, a bag of excrement and a red button that when pushed blared the n-word), Pamela passionately kissing Louie as they ate Chinese food and watched a meteor shower in Central Park, Pamela again rejecting Louie’s advances back at his apartment until she realized that she was really hurting him, the two of them sending pictures of their private parts to each other’s phones and finally, spending the night together.

In the morning, after Louie’s ex-wife brings his two girls back to the apartment, Pamela freakishly makes fun of his body in front of them. The girls love it. He just takes it.

And if viewers hadn’t figured it out yet, since the problematic Pamela has recurred on the show for a while now, she was in that moment revealed to be a toxic individual -- certainly not as toxic as someone who would commit a sexual assault, but an awful person in her own right.

“Pamela Part 3” opened with a sequence that sealed the twisted deal: Pamela had all of Louie’s furniture removed while he was out, insisting that he needed to buy new things. And he was okay with this -- so okay that the two of them had sex on the floor of one of his now empty rooms. And then they went shopping for new furniture.

The end of the episode was about as intimate and serious as a television series can get, at least on basic cable, as Pamela asked Louie to strip and join her in a warm bath. Both laid themselves bare on emotional and physical levels. Louie’s discomfort in his own skin was palpable as he stood naked before Pamela (his backside to the camera). Pamela was equally vulnerable, acknowledging that her defenses are always up much higher than she would like them to be (those are my words, not hers), especially when it comes to falling in love.

“I want to do what you want but I can’t,” she explained, sounding wounded while avoiding the cliché of dissolving into tears. “There [are] some things I just can’t do. So is it okay that I’m here? I want to be here. We’re in the tub. We like each other. Can this just be okay?”

Fortunately, the almost unbearable intimacy of it all was nicely relieved by a genuinely amusing sight gag -- as Louie lowered his body into the tub he displaced a large amount of water that flooded the bathroom.

This is the kind of narrative complexity and character insight we years ago came to expect from the better episodes of HBO’s “Six Feet Under” and AMC’s “Mad Men” -- and also the Woody Allen movies from his “Annie Hall”-“Hannah and Her Sisters” period. The difference is that I like the characters in those memorable shows and movies, but I would rather eat glass then hang with Louie and Pamela.

Still, I’m deeply impressed by the storytelling here. There is so much to think about and so much to anticipate -- and, maddeningly, no word as to when “Louie” will return, or if there will even be a fifth season. We need answers.