Lucky Charms Wants To Know What Makes You Lucky 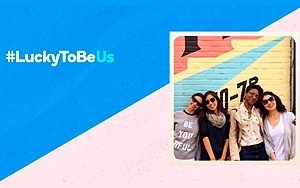 “We are honoring everything that makes each of us special and adds color to our world – just like the marshmallow charms in our cereal,” said Michael Lenahan, associate marketing manager, Lucky Charms. “We are celebrating everyone who is proud to live life on their own terms and love every second of it.”

This year’s campaign kicked off with an original video, and Lucky Charms is asking fans to share why they feel “Lucky To Be” by using #LuckytoBe through posts, tweets, photos and video on Tumblr, Facebook, Twitter and Instagram. Content using the hashtag is aggregated and shared on  Luckyto.be Tumblr.

To help boost the initiative's online buzz, the campaign has partnered with social media influencers Hannah Hart of My Drunk Kitchen and David Levitz. They have created original #LuckytoBe content for Instagram, Tumblr and YouTube, and are encouraging their fans to share their own #LuckytoBe posts across social networks.

In addition to the #LuckyToBe online activities, Lucky Charms is participating in several off-line events, including the Stonewall Columbus Pride Festival on June 20th and 21st in Columbus, Ohio, and the Twin Cities Pride Parade/5K on June 29th in Minneapolis. Participants are encouraged to share what makes them proud to be who they are and why they are “lucky to be,” tagging all social posts with official campaign hashtag #LuckyToBe.

The campaign builds upon the brand's 50th Anniversary celebration that launched earlier this year. Both initiatives celebrate Lucky Charms’ cereal’s fans, particularly "adult kids at heart," say executives. In fact, nearly half of Lucky Charms consumers are adults: 47.8% of Lucky Charms cereal is consumed by adults 18 years and older, according to the NPD Group's National Eating Trends.