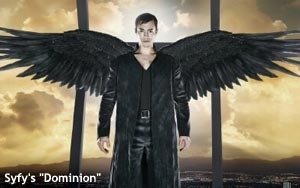 At the end of April, Syfy's President Dave Howe spoke with a group of journalists who had gathered together for a preview of his network’s programming plans, well ahead of its brief time on stage at the massive NBC Universal Cable Networks upfront presentation that would take place several weeks later.

"We're investing heavily in great scripted content,” Howe told the press. “We’re committed to bringing our audience the very best in science fiction and fantasy entertainment. Our strategy is to position the brand at the forefront of smart, cutting-edge, buzzy and provocative story-telling.”  Howe then listed several “high-pedigree” scripted series Syfy had green-lit in 2014, including “Ascension,” “12 Monkeys,” “The Expanse,” “Killjoys” and “Dominion.” The latter is the first of the group to make it onto the network’s schedule. It premieres tomorrow night at 9 p.m. EST.

"Dominion,” a continuation of the story that began in the 2010 feature film “Legion” -- which featured several of the same characters but not the same cast -- is a good start. It may not be as sophisticated or profound as “Battlestar Galactica” -- the acclaimed space-opera against which all other Syfy scripted series are unfortunately compared through no fault of their own -- and it isn’t as charming or forward-thinking as “Eureka,” a series that in hindsight seems ever more impressive as an exciting celebration of creativity and intellect. But with apologies to “Warehouse 13,” another enjoyable Syfy series that recently reached the end of its run, “Dominion” is more fun and more promising than any scripted effort the network has presented in years. (Of course, the most fun and exciting series on Syfy in recent years remains the reality-competition show “Face Off,” but this column is focusing on scripted fare.)

The story of life as it is lived in what used to be the United States before a war between rogue angels (led by the nasty archangel Gabriel) and humanity (led by the good archangel Michael) destroyed most of mankind 25 years ago (when God up and disappeared), “Dominion” is full of the kind of religious overtones and underpinnings that give genre enthusiasts much to blog and tweet and post about. I won’t go as far as to say that theologians will embrace it the way so many of them took to “Galactica,” but you never know. The appeal of “Dominion” in future episodes will rise or fall in correlation with the depth and insight of its storytelling.

For now, the extra-long premiere episode satisfyingly functions on several levels. It is filled with enough special effects (fearsome killer angels) and action sequences (mostly involving warfare with those angels) to satisfy younger genre fans. There is also a generous helping of nudity (male and female soldiers bunk and shower together with no obvious displays of attraction) and some hard language, which once upon a time would have been signals that a show of this kind was not for children, but by today’s standards should ensure that kids will love it. As intense as “Dominion” gets at times, it is still pretty soft stuff as compared to the most popular video games. The media playing field is still far from level.

Another draw, and one that should further guarantee mass acceptance of “Dominion” at the upcoming San Diego Comic-Con next month, is the inclusion in the cast of two popular genre personalities -- Anthony Stewart Head (“Buffy the Vampire Slayer”) and Alan Dale (“Lost”). They portray pontificating patriarchs of the two ruling families of Vega, the former Las Vegas, the strongest and safest of the remaining cities and the primary locale of the show. Even as they stand united to fight off renewed threats from the angels, the two families are entangled in so many personal conflicts that “Dominion,” in addition to recalling “Galactica,” “Supernatural,” “Starship Troopers” (those showers!) and even Syfy’s other post-apocalyptic series “Defiance,” also at times starts to evoke memories of “Dynasty” and “Melrose Place.”

The biggest obstacle “Dominion” faces in this very competitive television summer comes not from outside but from within. The overloaded first episode is so busy educating viewers who haven’t seen “Legion” and un-spooling the narrative’s dense mythology that it could push away or discourage anyone looking for simple escapist entertainment -- something that “Dominion” has the potential to serve up in formidable fashion.

Howe at that press gathering in April said that upcoming Syfy series would be “provocative” and “buzzy.” I imagine “Dominion” will be both of those things if it continues to balance the intimacy of the eternal struggle between good and evil at its core with the extreme warfare between the angels and mankind. The nudity and violence won’t hurt, either.