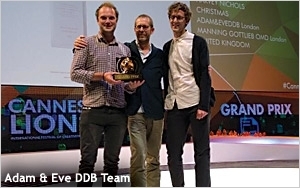 UK ad shop adam&eveDDB was awarded the Grand Prix Press Lion Wednesday night in Cannes for its holiday campaign for Harvey Nichols, “I’m Sorry I spent It On Myself.”

It is the shop’s second Grand Prix award for the same campaign, which was also awarded the top prize in the Promo and Activation Category earlier in the week.

Remi Babinet of BETC Paris and this year’s Press Lions jury president tweeted that the press jury was “looking for simplicity, intelligence, beauty,” from the 5,000 entries for Press Lions this year.

The Harvey Nichols print campaign was part of a broader integrated effort in which the client touted a range-of-budget gift selection for the holiday season so that people could “spend less on others and more on themselves.”

Y&R Santiago won a Press Gold Lion for a Rothhammer campaign called, “When Love is Born a Friend Dies.”

There were also 21 Silver Press Lions awarded and 50 Bronze Press Lions, with 18 of the latter awarded to entries from Brazil.