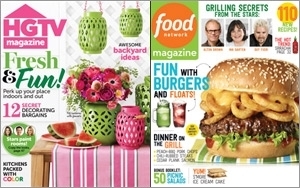 This week, Hearst Magazines revealed plans to raise the rate bases for HGTV Magazine and Food Network Magazine beginning early next year, reflecting the growing popularity of titles created in collaboration with TV shows, especially at the newsstand.

These will be its fourth and fifth rate base increases since it was launched two and a half years ago.

Both titles are published by Hearst in partnership with Scripps, which owns both HGTV and Food Network.

Following the success of these titles Hearst is pressing ahead with new titles based on TV franchises: in the first quarter of this year Hearst launched Dr. Oz The Good Life, featuring the ubiquitous Dr. Oz, who got his first TV exposure thanks to appearances on Oprah and in 2009 launched his own show under her aegis.

Condé Nast, publisher of Self, FremantleMedia North America, and London Luxury have struck a deal under which London Luxury will create a collection of products bearing the Self brand, including performance bedding, foam products, bath towels and rugs, sport towels, and personal care items including body brushes, robes and sarongs, and eye masks, among other thigns. The product line will be marketed under the Self Healthy Home banner. The deal was brokered by FMNA, licensing agent for Condé Nast brands, Self and Epicurious.

National Journal unveiled a redesigned version of its flagship magazine this week, led by editor Richard Just. The revamped magazine includes new features like: The Inner Loop, a front of the book section featuring short narratives about DC and the world of politics; Hyperlocal, focused on how political controversies are playing out in specific towns and communities across the country; One Good Idea, examining innovative policy ideas; One Good Book, highlighting new books about politics; First-Person, a guest column by D.C. insiders; Tactics, a back of the book feature using data compiled by National Journal’s research division to explain how Washington really works; and One Good Chart, illuminating national politics or D.C. with a graphic. The first issue with the new look examines the upcoming 2016 presidential race, including the leading contenders (so far) and top issues.

Doug Brod has been promoted to editor-in-chief of TV Guide Magazine, having previously served as executive editor of the publication. Before joining TV Guide Brod was editor-in-chief of Spin magazine, and also spent eleven years as an editor at Entertainment Weekly. Brod’s old role as executive editor will be filled by Michael Schneider, who previously served as the magazine’s Los Angeles bureau chief; before that Schneider served as TV editor at Variety and Daily Variety.

Craig Marks has been named editor-in-chief of Spin magazine. In addition to a previous seven-year stint as editor at Spin, Marks most recently served as editorial director at BlogTalkRadio, and before that co-founded and led PopDust, a pop culture site. He also served as editor at Blender and Billboard, and has written for Rolling Stone, GQ and The New York Times.

Michelle Lee has been named editor-in-chief of Nylon and Nylon Guys magazines, effective June 25. Lee previously served as a founding editor of Us Weekly, The Daily Front Row, and CosmoGIRL. Most recently, she was the chief content and strategy officer at brand publishing agency Magnified Media, and prior to that was senior vice president of content of Hollywood.com.
magazines
Next story loading