A Little Girl Takes On TV Violence - 43 Years Ago On 'Bewitched'! 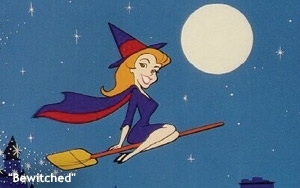 I’m noticing a significant uptick in concerned comments by television critics and bloggers about the rising tide of graphic ultra-violence in television programming. It’s everywhere, from the gore-groundbreaker “CSI” on CBS to the shocking horrors of NBC’s “Hannibal” to the perpetual slaying of the innocent in FX’s “Fargo” to the new granddaddy of brutality and gore, HBO’s “Game of Thrones.” I should probably also highlight Starz’ “Spartacus,” which ended its run a couple of years ago after demolishing every conceivable boundary for blood and guts and stomach-turning carnage.

Television violence is certainly nothing new, nor concerns about how it may be impacting individuals in general and society as a whole. But since when has bloodlust been so hot?

This current surge of bone-crunching brutality on TV didn’t happen overnight. It’s been building for decades. Indeed, way back in 1971 on an episode of the now-classic comedy “Bewitched” titled “TV or Not TV” (recently telecast on Antenna TV), impressionable young Tabitha, daughter of beautiful suburban witch Samantha and her advertising executive husband Darrin, became quite upset over something she was watching with her little brother Adam, a child warlock.

Remember … there was no cable in 1971. The content that was upsetting young Tabitha was being presented on broadcast television!

What was so offensive as to make a young witch twitch? It was a show for kids titled “Steamboat Bill,” featuring the puppets Punch (a male) and Judy (a female), a novelty act that dates back in one form or another to the early 19th century and one that in all of its incarnations was always very popular with children. A distinguishing element of the act is that Punch often hits Judy, sometimes repeatedly. Generations of kids have loved this.

On “Steamboat Bill” Punch would club Judy in the head with a bat every time she refused his amorous advances. Tabitha was not amused.

“That’s awful the way he keeps hitting her!” Tabitha protested to her mother, who dismissed her daughter’s remarks by noting that Judy “isn’t a member of women’s lib.” (The laugh-track swelled with that comment.  Remember the era.)

Adam’s response to Tabitha’s complaint was to punch her in the arm.

Tabitha wasn’t the only one bothered by the violence in “Steamboat Bill.” Her dad Darrin -- the account executive assigned to the show -- cringed while fulfilling his professional responsibilities by watching it in his office.

Back home, Tabitha finally had had enough. “Someone has to put a stop to all this hitting and it might as well be me!” she declared. Seconds later she transported herself into the show and demanded in front of a national television audience that Punch stop hitting Judy.

“You don’t have to be scared of Punch anymore,” Tabitha told her.

Tabitha then magically made Punch’s bat disappear. And then, in a truly disturbing turn, Judy hurriedly found another bat for him. Punch thanked Judy by clubbing her with it.

Tabitha was furious. “Punch, you’re setting a bad example for all the little boys watching!” she said. “My little brother hit me because of you!”

“When you get older you’ll realize girls have feelings too!” she continued.

As I watched the following exchange just a couple of weeks ago I thought it resonated today more than ever:

Tabitha (to Judy): “Judy, I’m going to find you another boyfriend!”

Judy: “Would you, Tabitha? Would you? One that doesn’t hit quite so hard?”

Tabitha: “You know, Judy, not all boys hit girls.”

Punch: “They don’t know all the fun they missed!”

After making that statement Punch proceeded to pummel Judy once again.

The sponsor of “Steamboat Bill” – that would be Darrin’s client – loved the interaction between Tabitha and the puppets and wanted her to become a permanent addition to the show, but Tabitha was having none of that. She was there only to put right something she perceived to be wrong.

Still, it was clear even to an eight-year-old girl back in 1971 that she was fighting a losing battle. When she returned home all she could say to her mom and dad was, “There’s too much hitting on TV!”

Nobody seemed to take Tabitha all that seriously at the time. Maybe somebody should have.