Terri & Sandy Who? With Effie Win, They Hope You Have A Better Idea 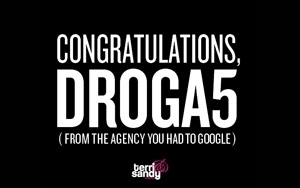 Now, The Terri & Sandy Solution is playing off the fact that it is the lesser-known agency among these winners with an outdoor campaign running for the week of June 23.

Four different layouts were created for each of the other New York agencies to congratulate them on their Effie awards. Each billboard also features the hashtag #TheAgencyYouHadToGoogle to humorously acknowledge that The Terri & Sandy Solution is likely to be unrecognizable.

"We were so flattered to be in such esteemed company that we wanted to do something fun to celebrate and congratulate the other agencies," say Terri Meyer and Sandy Greenberg, co-founders, Terri & Sandy Solution. "We figured the best way to tip our hat to the advertising community would be by sending kudos in the form of an ad. An out-of-home buy, strategically placed at subway stations near each office, showcased our message."

Media-buying shop Media Worx bought ad space at subway entrances closest to the agencies' offices under the effort, although this campaign did have some challenges. "The first hurdle was time. We had to act fast to figure out logistics and get the units live while the message was still relevant," say Meyer and Greenberg. "If that wasn't a big enough hurdle, two of the agencies moved within the week that we put the program together. Thankfully, our crack account team and the [out-of-home] company were able to make a last minute switch in the buy."

This campaign is designed to be unusual, particularly because most agencies don't recognize their rivals, but Meyer and Greenberg are proud to be mentioned alongside these successful groups and wanted to celebrate that achievement. "We hope it makes them laugh. Better yet, we hope it prompts them to Google us and find out who the heck we are. Either way, it's all meant in good fun, and we think it will be appreciated by the agencies," say Meyer and Greenberg.

Indeed, the mentioned agencies are flattered by the campaign, even though most had not yet seen the ads. Still, "[We] love the idea because it's a win / win," says Mekanism's Michael Zlatoper. "T&S gets press and drums up press for the other agencies as well. It's a good idea for them to help build awareness around their shop. Everyone wins."