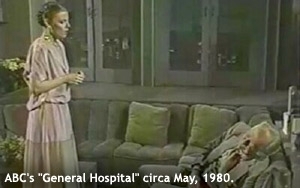 Watching the Daytime Emmys on my laptop the other night, there was a moment when I unexpectedly stopped and marveled at the advances in technology since I was in school.

The forced contemplation began when the women nominated for Outstanding Supporting Actress in a Drama Series were being announced. One of them was “General Hospital” star Jane Elliot. I knew Elliot was among the nominees, but it wasn’t until the moment when her name was mentioned that I was truly struck by the march of time and developments in media along the way.

You see, I remember when Elliot won the Emmy in 1981 for her portrayal of Tracy Quartermaine, the character she has continued to play (with a few breaks) until this day (on “GH” and “The City”). She won for her work in the 1980 storyline detailed below. The Daytime Emmys were telecast in the afternoon back then, so I wasn’t able to watch them that year because I was working at the time and VCRs had yet to hit the mainstream.

That was then -- and here we are now, able to watch the Daytime Emmys on any number of devices at any time and in any location we choose, presented over a medium that didn’t even exist when Elliot was first honored. And there she was back among the supporting actress nominees, as she had been at the start of the decade that brought us cable television and VCRs.

But there’s a much more interesting reason why having Elliot among those nominees got me to thinking about the amazing changes in the way we consume media that have developed during the decades in which she has been on “GH.”

Elliot began playing Tracy, the only daughter of Edward and Lila Quartermaine, way back in 1978, the same year I began watching the show. When people speak of the golden era of “GH” they generally refer to the legendary story of Luke and Laura, which also began that year and continued through early 1982. But ask anyone who watched “GH” back then and they will tell you that there were many other compelling characters and riveting storylines playing out at the time. Many of them involved Tracy, a habitual schemer who was always trying to impress her wealthy parents and earn her place in the family business.

Tracy was (and remains) a consistently fascinating character, but never more so than in 1980, when her father removed her from his will after one of their epic disagreements and her dark side emerged. In what I consider to be the most exciting daytime drama cliffhanger in television history – one that began on the Friday of Memorial Day weekend in 1980 and played out on the afternoon of the holiday itself – Tracy and Edward were really going at it when Edward suddenly clutched his chest and fell to the floor. A man with a history of severe heart problems, the immobilized Edward painfully pleaded with his daughter to bring him his medication. In a turn that froze the blood of everyone who was watching that day, Tracy refused to help him unless he agreed to restore her name to his will. Edward wouldn’t comply. The tormented Tracy stood there shaking, refusing to give in as she watched her father die.

That was the end of Friday’s episode. The resolution was three days away, and the weekend would be an eternity to wait, as weekends often were back then, which only added to the fun of watching soaps. (The “wait” is a notion that utterly escapes young people in the era of binge viewing and television on demand.)

But, for me, there was a significant complication. My friend Mary was house-sitting that weekend at a great beach house a couple of towns over and she invited everyone to come by on Memorial Day. As my friends and I packed up for the big afternoon, Mary informed me that the house did not have a TV! Except for a radio it was media free. (Let that one sink in a moment.)

That meant there was no way to watch “GH” and see if Tracy was really going to let Edward die. Or did it?

Determined not to miss out, I grabbed an old black and white TV (the kind with rabbit ears) and several extension cords. When I got to the beach house I ran the cords from the house out onto the beach, placed a large umbrella over the TV to shield the screen from the sun, plugged the TV in and played with the rabbit ears until the picture was clear. The beach party was on and everything was good to go for 3 p.m. when “GH” would begin.

What followed was an experience I will never forget: When the episode started and the iconic (and since replaced) original theme song began to play, people came running from up and down the beach, thrilled that they might get to see “GH” that day and desperate to learn what was going to happen to Edward. Retro spoiler alert: Tracy finally picked up the phone to call for help, after having waited far longer than anyone should when someone is having a heart attack. Then the presumed dead or dying Edward snuck up from behind and surprised her. Tracy screamed. So did everyone on the beach. Edward had been faking his heart attack to test Tracy’s loyalty.

We all went to certain lengths back then to enjoy the must-see episodes of our favorite shows, since for all we knew we might never see them again -- especially soap operas.

Unfortunately, Elliot didn’t win the other night, which would have made this story resonate even more. Maybe she’ll take home the award next year, almost 35 years after her original triumph. And maybe I’ll be watching on the beach on one of my mobile devices.