Would You Lease A Pair Of Mud Jeans For A Year? 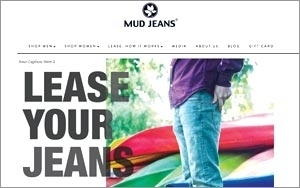 The Dutch company Mud Jeans set out to create a program based on a new philosophy that would enable consumers to rent -- rather than own -- a pair of jeans. Choose a pair, pay a small annual deposit and monthly rental fee for a year  and then make the choice about whether to keep it, switch for another pair, or send them back and discontinue the program. What a great opportunity to reach a completely new market engaged in conservation and renewable products. How would you design a search campaign for this promotion, and what type of retargeting audience segments would you choose?

Apparently there are similar companies like this in Europe. Reuse, renew or sell what you don't want. I take my resalable cloths to Recycled Rags in Newport Beach, Calif., but companies like Patagonia have their own idea. As part of the Common Threads Initiative, launched in 2011, Patagonia tries to help customers use their goods for a long time, repair what breaks, reuse or resell items they no longer want and recycle items that have outlasted their usability. They also facilitate multi-seller branded stores on eBay where consumers who take the Common Threads pledge can sell in this store and have their gear listed on Patagonia.com's Used Gear section.

The companies running these types of programs, of which there are many, miss an incredible opportunity to reach an underserved market segment extremely mindful of not being wasteful.

JWTIntelligence tells us in a study released this week that in 2010, Ikea Sweden created a Web site for customers wanting to sell their used Ikea furniture. Three years later it expanded the idea with ads featuring only secondhand goods. Ikea asked 50 people looking to buy new Ikea furniture if it could help sell their old items. The store then collected the goods and showcased them in a two-month campaign backed by a budget equivalent to that of a new product launch. Its Facebook page became a "digital flea market every Sunday."

The JWT study defines the "circular economy" as a restorative way to create, use and dispose of products that designs out waste. This framework weaves together emerging practices like collaborative consumption with older ideas like recycling and re-manufacturing. Brands are taking advantage of the concept by changing behaviors. They sell secondhand products, repair worn goods, and embrace newer concepts like car-sharing. The report came from talking with experts and gathering quantitative and qualitative analysis conducted by JWT throughout the year.