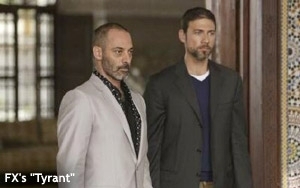 This is a topic that is very much top of mind these days among critics and viewers alike. Examples of it are everywhere, from the title character shockingly attempting to force himself on a woman in a recent episode of FX’s “Louie” to the perpetual assault and denigration of women on HBO’s wildly popular “Game of Thrones.”

The disturbing treatment of two women in the first episode of the new FX drama “Tyrant,” which premiered this week, was for Ryan the last straw. As she so succinctly says in her column, she has had enough. Or, to use her word, she is “done.”

Ryan focuses on the often random sexual assaults of women in television programs, which more often than not are utilized simply as plot points or the means by which other characters (generally the bad guys) are developed. She doesn’t say that sexual assaults shouldn’t be included in storytelling, but she is tired of largely undefined female characters being raped or otherwise attacked simply to help build a narrative. In the first episode of “Tyrant,” as she notes, there are three instances in which Jamal Al-Fayeed, son of the dictator who rules a fictional Middle Eastern country, sexually brutalizes women. Two of those incidents involve the same woman; an individual about whom viewers know nothing (and likely never will, given what happens to her by episode’s end). Apparently she is just there to be violated. The other woman is Jamal’s new daughter-in-law -- again, a woman viewers know nothing about. (I am trying not to spoil anything here, because “Tyrant” is shaping up to be a significant live+3 and live +7 success for FX, meaning that many people who intend to watch it may have not yet done so.)

Will viewers learn more about these women in future episodes? Possibly. Will more women be similarly abused? That’s also very likely. This is a story about the family of a brutal dictator in a country that does not exactly respect women. Still, that didn’t make watching what happened to the two women in the pilot any less disturbing. At the very least, viewers could have learned a little something about them before they were assaulted, which would have developed them as human beings who were violated rather than mere props on hand to intensify the drama.

I won’t speak for Ryan, or anyone else, when I suggest that the pilot of “Tyrant” may not have been quite so disturbing had incidents of the sexual abuse of women in entertainment on all screens not already been so prevalent. It seems to be everywhere.

Nothing excuses the rape and abuse of women in so many shows, the cumulative impact of which is to desensitize people to sexual assault and other forms of violence. Indeed, nothing excuses the same cavalier approach to exploiting people in general and women in particular that permeates all entertainment media, including movies, video games and comic books in which countless innocent people are assaulted or tortured or killed simply to heighten the conflict between the good guys and the bad guys.

I’m not interested in the argument that the subject at hand here is “only a TV show” or “only a movie” or whatever. We all know most of the stories being told aren’t real. That doesn’t make violence of any kind any less offensive when presented as entertainment, especially when it isn’t handled with some degree of sensitivity.

Reviews for the first episode of “Tyrant” were mixed at best. But the ratings have been encouraging, and FX may have another long-running hit on its hands. Given its milieu, it should come as no surprise to anyone if the treatment of women as lesser individuals in its storytelling doesn’t change. But there is certainly room for improvement in the way those women are presented.