Opportunities Ahead: 2014 UK Display Market To Be 47% Programmatic

According to the IAB UK, with research conducted by strategy consultancy MTM, 28% of all UK display advertising spend went through programmatic channels in 2013. Programmatic direct accounted for 15% of total spend, while programatic exchanges (RTB) accounted for another 13%.

IAB UK expects programmatic to rise to account for 47% of the total display market by the end of 2014, which would represent a 68% growth rate year-over-year. The report notes that programmatic could reach 60-75% of total digital display advertising by 2017.

Sean Hargrave did a great rundown of what the rise of programmatic in the UK could mean for agencies in the London Blog, theorizing that programmatic could take “ad men out of agencies” and “into the cloud.” That question exists in the U.S. too. 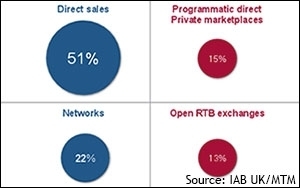 But while the expected rise of programmatic spending in the UK presents a potentially sticky situation for some agencies, it could spell opportunity for others, owing to the fact that 25% of European marketers haven’t ever heard of programmatic. (Keep in mind that the 25% figure refers to all of Europe, while the new report projecting spend growth refers to the UK only, which is ahead of other European countries in terms of programmatic adoption.)

If the UK digital ad market is to be 60-75% programmatic by 2017, however, it means that the marketers who have yet to hear of programmatic will be joining the fray. That’s where one opportunity awaits agencies that have already established programmatic methods.

Another opportunity for agencies lies in the fact that more publishers will come on board with programmatic in response to rising demand. Currently, under half (48%) of publishers in Europe are using programmatic to sell, per a recent AppNexus, Warc and IAB Europe report. (Again, the 48% figure refers to all of Europe, not just the UK.)

The fact that more publishers will be turning toward programmatic is significant because it’s likely the publishers will want to go the “programmatic direct” route with at least some of their inventory, meaning that some form of direct relationships will be necessary. As the IAB UK report shows, more spend in 2013 was via programmatic direct than RTB exchanges. This is where agencies can use existing relationships to their advantage.

“Programmatic has risen primarily because of the efficiencies it provides marketers when faced with an overwhelming level of digital inventory and audience fragmentation,” stated Tim Elkington, director of research and strategy at IAB UK. “It’s likely to grow even faster as the market becomes more experienced using programmatic, has a greater understanding of how it works, and is properly educated around the negative perceptions associated with programmatic trading.”

I know I mixed and matched two different reports to theorize -- one for Europe and one for the UK exclusively -- but the point remains the same, even if the UK is ahead of the curve. The expected rise in programmatic spend means more marketers and publishers will come on board, which presents opportunities for everyone in the industry. How those opportunities unfold remains to be seen.