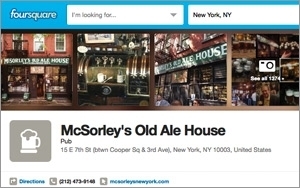 The free ride could soon be over for larger businesses that rely on Foursquare’s database of bars, restaurants, boutiques, and the like.

“Foursquare has begun conversations with a handful of large enterprises using our database for commercial purposes to contribute to the upkeep and innovation of our platform,” the company stated.

The decision is not likely to affect smaller businesses, Foursquare noted.

“It is important to stress these conversations are with large companies with substantial revenue, or issue hundreds of millions of API calls a year and make up less than 1% of the 63,000 developers leveraging the Foursquare platform,” according to the company. “For the other 99% of developers, there will be no change in how they work with Foursquare, and they will continue to get API access for free.”

The initiative follows a major reorganization at Foursquare, which popularized mobile check-ins and game-like features, such as the ability to earn “badges” for frequently engaging with the app.

The company recently divided into two distinct apps: A new app named Swarm that does what everyone associates with the Foursquare brand, which allows users to check into physical locations and become the “mayor” of their local bar. A second is the more Yelp-like service, which took the Foursquare name.

Web watchers have attributed Foursquare’s growth to a shift from reward-based friend-tracking to Yelp-like local business listings and reviews.

Making Foursquare’s efforts to branch out all the more pressing, Facebook recently debuted an optional check-in featured named Nearby Friends. Given Facebook’s sheer size, the service represents an immediate threat to Foursquare, along with Google's Latitude service, and Apple's Find My Friends.

The Wall Street Journal first reported the news on Thursday.