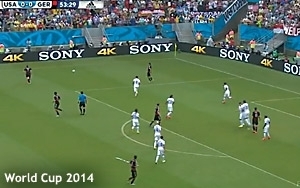 More big numbers for ESPN and the World Cup soccer.

In a major game on Thursday between the U.S. and Germany -- in which Germany won 1-0 -- ESPN pulled in a Nielsen 10.7 million viewers -- the third-most-viewed men’s World Cup match ever on ESPN.

These results, while strong, did not improve upon an earlier round match between the U.S. and Portugal, which took in 18.2 million viewers. U.S.’s first game of the World Cup against Ghana tallied 11.1 million viewers.

Looking at its digital video results, viewers watching the U.S.-Germany game on the WatchESPN app had 3,200,000 unique viewers. ESPN says this accounted for a 10% to ESPN’s English-language TV audience.