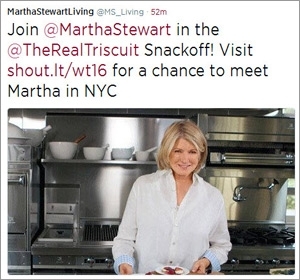 Mondelez International's Triscuit brand and Martha Stewart have partnered on a summer recipe contest, offering a grand prize of a trip to New York City to meet Stewart.

The contest consists of four recipe challenges. Starting June 30 and every other week through Aug. 24, Stewart will debut a new recipe featuring a different seasonal ingredient on the Snackoff's site.

To enter, consumers create their own Triscuit recipe using the seasonal ingredient, and post the recipe and a photo of their snack creation on the contest site.

The entrant who receives the most votes for her or his recipe will win the grand prize, which includes a trip to New York for the winner plus three guests, a gift package including Triscuits and various Martha Stewart-branded cooking items, and a meet-and-greet with Stewart for the winner and one guest, according to the posted contest rules.

The contest/sweeps is being supported with a video/TV spot of Stewart encouraging consumers to enter and messaging on the Facebook and Twitter accounts of both Stewart and the Triscuit brand, plus the Martha Stewart Living Twitter account.