CBS' 'Under the Dome' Once Again Adds Sizzle To Broadcast's Summer 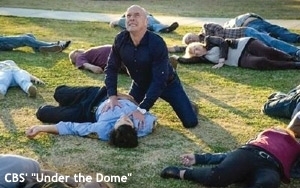 It’s been a crazy busy summer for scripted drama on the broadcast networks, and there is more to come. Those shows currently with us and those set to debut during the next few weeks include “Restless,” “Unforgettable” and “Extant” on CBS; “The Night Shift,” “Taxi Brooklyn,” “Crossbones” and “Welcome to Sweden” on NBC; “Rookie Blue,” “Motive,” “The Astronaut Wives Club” and “Mistresses” on ABC, and “24” and “Gang Related” on Fox.

Some of them are quite good -- especially Fox’s rip-roaring “24,” which has improved greatly by compressing its usual 24-episode story line into a fast-moving 12 parts, and ABC’s durable and dependable “Rookie Blue.” Some of them feel like summer filler, which raises the question, “why even bother”? It’s not like there aren’t numerous well-made dramas available for adult consumption on a host of basic-cable networks this summer -- especially USA, AMC, FX and TNT. Why settle for anything less just because it’s on broadcast television?

And then there’s the reigning king of scripted broadcast summer fare: CBS’ “Under the Dome,” which begins its second season tonight. “Dome” took the industry by storm last summer with its robust ratings and general critical support. There hadn’t been that much excitement about a scripted summer series on a broadcast network since CBS debuted “Northern Exposure” in July 1990. One could argue that CBS’ bold move in scheduling an exciting new scripted series as a summer “event” shook up its competitors; for example, I have to believe the attention paid last summer to “Dome” was one of the reasons why Fox decided to run a new season of “24” after the end of the traditional broadcast season in May.

While still loaded with reality fare, including the ambitious (and sadly underrated) “Rising Star” on ABC and heavyweights “Big Brother” on CBS and “America’s Got Talent” on NBC, there are scripted shows all over the broadcasters’ schedules, many of them produced and/or acquired specifically as summer entertainment. Who would have thought last year at this time that the broadcast networks in the summer of 2014 would be looking for the next “Under the Dome”?

Tellingly, and very wisely, CBS did not whisk the second season of “Dome” out of the summer and shove it into the traditional broadcast season, as it did with “Exposure” twenty-three years ago. Instead, the network is staying on course, utilizing “Dome” as a foundation of sorts in its construction of a solid summer season of original programming.

The strategy has already paid off. Speaking to the press on the morning of his network’s upfront presentation in May, CBS president and CEO Leslie Moonves noted that “Dome” had more viewers than any other new series during the full 2013-14 season, including NBC’s mega-hit “The Blacklist.” He did note that “Dome” did not have the most viewers in the 18-49 demographic, but the point was made. There is an audience for something more than reality competition fare in the summer months.

Furthermore, the support CBS gave and continues to give “Dome” has made the network a viable home for science-fiction programming in the summer months. Which brings me to the network’s next scripted summer entry: Based solely on the pilot, the upcoming “Extant” looks to be highly engaging, easy-to-take summer fun. It is going to receive an awful lot of attention -- not only because Steven Spielberg is one of its executive producers, but because it stars Academy Award winner Halle Berry. There will be more to say about that show closer to its July 9 premiere.

Why was “Dome” the first success of its kind in over 20 years? It’s not a feel-good show, which was the most appealing aspect of “Northern Exposure.” It’s not irresistible trash. It isn’t even pure escapism, like Syfy’s “Dominion” and MTV’s “Teen Wolf,” because even though there is an ever-expanding mystery surrounding the seemingly supernatural object of the title, the story is very much about how people are changing and coping with being trapped in bizarre circumstances, which has brought out many a personal secret and personality defect.

Also, main characters die as the story progresses. (One, in fact, is crushed to death in tonight’s season premiere. Not to worry -- that is barely a spoiler, if one at all.) The promise of many good deaths always seems to draw an audience.

“Under the Dome” is based on a novel by Stephen King (who is so impressed with the show that he wrote the script for tonight’s episode). Like HBO’s white-hot “Game of Thrones,” it is both working with its source material and expanding beyond it, keeping it fresh even for King’s most loyal readers and allowing it to extend over many more seasons than it might otherwise be able to do. Already, “Dome” seems more interesting as a television series than it would have been as a feature film, even if half the fun of watching this show is to point out its many plot holes.

broadcast networks, tv
1 comment about "CBS' 'Under the Dome' Once Again Adds Sizzle To Broadcast's Summer".
Check to receive email when comments are posted.
Next story loading