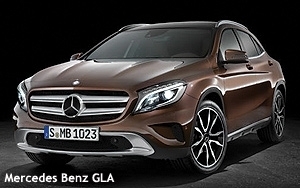 Each of the 42 brands studied in the "L2 Digital Index: Auto" study was scored against more than 350 qualitative and quantitative data points and assigned a “Digital IQ” ranking of Genius, Gifted, Average, Challenged or Feeble. Web sites and digital marketing are given the most weighting  at 30% each, with social media and mobile, at 20%.

Mercedes-Benz was the only brand to receive a Genius score, at 140. The German automaker was credited with continuing to complement offline campaigns with original digital marketing like its “#GLApacked” effort asking fans to tell what they would take on a dream road trip. It also won points for its “Take the Wheel” photo contest on Instagram and an optimized mobile site “with a wide array of shopping tools.”

Overall, just over half (52%) of the 42 auto brands were classified as Gifted, a quarter 924%) as average, 7% as Challenged, and 14% as Feeble. Those at the bottom tended to be ultra-luxury makes like Rolls-Royce, Lotus and Bugati, which largely ignore digital marketing.

The report, authored by L2 founder Scott Galloway, a clinical professor of marketing at NYU’s Stern School of Business, also drew a correlation between a brand’s Digital IQ and unit sales. A chart shows higher unit sales for high IQ brands like Mercedes-Benz, Volkswagen and Cadillac in the last 12 months than less digitally savvy ones like Buick and Mitsubishi.

Many other factors could play a role, though, including the inherent prestige of brands such as Cadillac or Porsche, built over decades.

The study also offered insights on how automakers and brands overall approach the different types of digital marketing examined. In social media, for instance, companies are still doubling down on Twitter and Instagram, while growth of Facebook has slowed because of the reduced organic reach on the site.

When it comes to mobile, companies have improved especially on the tablet side. Nearly a quarter of brands have sites tailored to tablet screens, while 90% have mobile-optimized sites. Error rates on car configuration tools on tablets are also down by half, to 10%. All but two brands—Lamborghini and Lotus—have official mobile apps.

The study also suggests auto apps maintain high visibility in the App Store because they receive a lot of user feedback. And 70% have earned a rating of 3.5 stars or higher. “Consequently, auto brands are frequently found on "featured lists,” it stated. For example, Jeep, Kia and Chrysler appear among top free catalog apps for iPad.

With companies like Apple and Google launching connected car platforms, more third-party apps like Pandora and Google Maps will become available for vehicles. That won’t help proprietary car apps, which have already struggled to gain traction. A third of brands have already agreed to support Apple’s CarPlay, according to the L2 report.