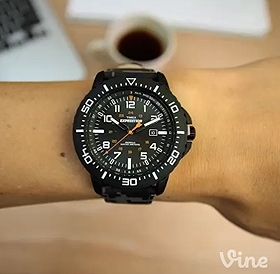 In order to woo adventurers to its line of Expedition watches, Timex is running a large-scale effort on social media. Working with Vine and Instagram influencers who are posting their own content, the company is also inviting users to post #MyExpedition photos to Instagram, and in return, earn a hefty 25% discount on their purchase.

“The campaign is about encouraging consumers to define the outdoors for us, asking them to share their summer adventures,” Sam Martin, brand manager, tells Marketing Daily. “We can't do the outdoors any better than the North Faces, LLBeans or REIs of the world, but we are trying to give a little spark to the sense of adventure our customers have.”

The target market, he says, is more likely to be aspiring to adventure than actually entering canoe marathons or attempting Mt. Ranier. “These are not the people climbing mountains and hanging off a ledge by one finger. That’s just not authentic to our brand. But that doesn’t mean they don’t see themselves as adventurers, and want more expeditions in their lives.”

He says the program, which will include additional product launches in the weeks ahead and is tied to the brand’s 160th anniversary, will run until September. So far, it’s averaging about 4,000 shares per day.

Part of the goal, of course, is to drive traffic to the Timex site, which is where the discount is activated, and to encourage purchase. Martin says the company chose Vine and Instagram because both worked well with existing platforms, “and we like the brevity of Vine.”

But he says the company also hopes to build up a substantial social media following for the Expedition, as it has with its (Iron Man) and (style) watches.

He says the Expedition competes most closely with models from Suunto and Casio, on the technology side, and with Swiss Army and Bertucci on the style side. But Casio’s G-Shock “is more urban, and more focused on action sports, whereas we are trying to view everything from an outdoor lens.”