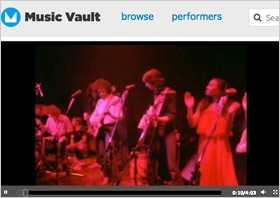 Would you watch regularly scheduled programming from what could very well become prime-time shows running across the YouTube Broadcast Network, if one existed? What YouTube lacks in organization, it makes up for in content. The Music Vault Deal provides an example.

Google's video site Tuesday announced a deal with Music Vault, which hosts music videos from legendary bands, bringing 12,000 concert clips to YouTube viewers. Some feature artists like Bruce Springsteen, The Grateful Dead, and The Who, Van Morrison, Neil Young, and U2, along with more contemporary bands.

More than 1 billion unique users visit YouTube each month to watch more than 6 billion hours of video. Reports suggest YouTube brought Google $1.5 billion in 2013 net revenue, about $3.5 billion in gross revenue, a bit short of the $5.6 billion estimated by eMarketer last fall. It also puts daily viewing hours approaching 300 million, up from the year prior, but below the one-billion viewer target by 2016 that some say became a goal in 2012.

And while 100 hours of video are uploaded to YouTube every minute, the possibilities for the video Web site to eventually create a network of stations, branded and non-branded, that viewers can access via television sets becomes very real. In fact, YouTube reaches more U.S. adults ages 18 to 34 than any cable network, per Nielsen.

Some reports suggest Music Vault, which launched a few months ago, will augment Google's music service, but I think Google execs have something bigger in mind based on the talent of content creators I viewed at VidCon, and buy-in from brands.

The ability to search and find content via a television remote or mobile phone running Android, in my opinion, still remains Google's biggest challenge. Move over, Pandora, MTV and many other more traditional broadcast network television stations.