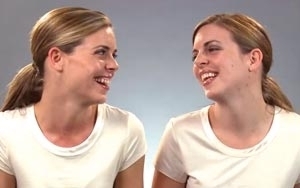 In an attempt to stem Olay’s slipping market share, Procter & Gamble has borrowed a marketing page from Doublemint, using identical twins to highlight the benefits of its ProX line.

Olay has signed up 21 pairs of identical twin women, with skin problems that range from freckles and fine lines to serious aging. (The youngest are just 20, while the oldest are 53.) Half of each twin pair got treated to eight weeks of the pricey ProX by Olay Intensive Wrinkle Protocol and Tone Correcting Protocol, and the other half got bupkes. Experts followed skin changes by microscope.

While such side-by-side comparisons are the bread-and-butter of wrinkle cream marketing, P&G has given it a fun twist by tracking the experiment, complete with the twins’ backstories, on a Web site. Not only did each member of the treatment group think they looked better, so did 100% of the neglected twins. The campaign also includes social, media and print advertising efforts.

The Regenerist line, introduced in 2003, also relies on a strong scientific positioning, as does ProX, which first appeared in 2009. At the time of its launch, ProX generated plenty of marketing buzz by charging department store prices, despite its mass distribution. (The products featured in this campaign cost up to $45.) The company introduced Olay Fresh Effects, aimed at Millennial women just beginning to think about aging, last year.

But all skincare marketers are likely to be minding their lab-coat inspired ads claims more closely than ever. Last week, the Federal Trade Commission announced last week that P&G rival L’Oreal had settled on claims of deceptive and misleading ads for Youth Code and Lancôme Génifique, which it had said are clinically proven to boost the production of “youth proteins.”