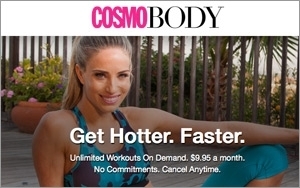 Food blogger Camille Becerra is also contributing to the channel.

Hearst is working with Vimby studios to create the streaming video content, which also includes a number of multiweek fitness programs with a distinctly Cosmo sensibility, like “Wowza Wedding Body,” “Sexier by Saturday,” and the intriguingly named “Revenge Body.” Interactive elements with the fitness programs allow users to track how many calories they have burned, and

The CosmoBody subscription costs $9.95 per month, and Hearst is offering a 10-day free trial.

Last week, Hearst Magazines Digital Media announced that it has redesigned the Web site for Cosmopolitan , including a new look, new publishing tools and a new content personalization engine. The new publishing system will allow editors to produce and post stories more quickly, enable advertisers to integrate their messages into the Web site more centrally and offer readers an intuitive, customized content feed.

The One Club, an organization which produces One Show and Creative Week, is launching a new print magazine, called one. a magazine, for creative workers in the advertising and design fields. The One Club announced the launch with a tongue-in-cheek press release in which Yash Egami, director of content for The One Club, stated: “The Web is dead. Sure, the Internet had its day in the sun, what with all the cat videos, but those days are over. We have officially entered the post-digital era.”

Better Homes and Gardens is adopting a new tagline, “Life in Color,” effective with the magazine’s August 2014 issue. According to publisher Meredith Corp., the new tagline better reflects the magazine’s basic mission as a source of inspiration and guidance for readers about decorating, entertaining, cooking, outdoor living and gardening.

The new tagline replaces the magazine’s old tagline, “It’s Where Life Happens.” Better Homes and Gardens editor-in-chief Gayle Butler stated: “‘Life in Color’ expresses the way we fuel our 40 million readers’ passion to live a more colorful life.  It’s not just about literal color, but the color that comes from celebrating, trying new things, collecting new experiences, and from putting together a home that reflects who you are.”

Lindsay Lambert has been named managing editor of Time Inc.’s Coastal Living. She previously served as content editor at Rue La La, with responsibility for its Living and Little Rue businesses. In this role, she created and edited content for the Rue La La Web site and its daily email newsletters for members, as well as posts for its blog. Before that, she served as editor of two RMS Media Group luxury publications, Northshore and Ocean Home