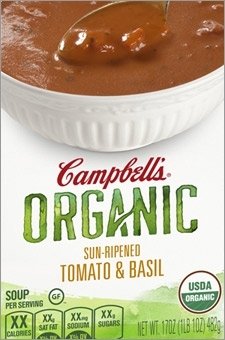 ill launch more than 200 products in its coming fiscal year — including more organic and veggie- and protein-based offerings — as it seeks to boost sales in the face of what President and CEO Denise Morrison described as "dramatic shifts" in the landscape of the food business.

Morrison, speaking during the company's annual investor meeting, said that the launches and Campbell's overall strategy are designed to respond to several transformational trends.

These include unprecedented consumer demand for transparency about ingredients and how foods are grown, produced and marketed; the diverse makeup, lifestyles and economic needs of today's American families; and the ongoing financial insecurity of both lower-income Americans and the shrinking middle class, which is being manifested in cautious food-buying behavior and a shift to buying more food in value channels like dollar and club stores.

A focus on healthier foods with simpler ingredients, and on "packaged fresh" and organic — both within Campbell's'-branded, center-store lines and through fresh and organic lines from acquired companies like Bolthouse Farms — is clear in the launches. It's also clear in Campbell's' refreshed mission statement: "Real food that matters for life's moments."

Morrison said that an extremely tough first quarter caused by severe weather only exacerbated the fundamental changes that have affected the food industry as a whole over the past "tumultuous" year. Furthermore, she said, food companies' ability to adapt to new consumer dynamics will continue to determine whether they succeed or fail going forward.

A "profound transformation" in consumers' priorities with respect to food has been "building for a number of years, and now appears to be at or near a tipping point in terms of its impact on the industry," Morrison said.

She noted that not just Campbell, but most major food companies, have in recent quarters seen weak sales that have resulted in lowered outlooks for the year.

Even with its slew of product launches, for fiscal 2015, starting Aug. 4, Campbell expects organic sales to grow at a pace below its long-term target of 3% to 4%, although margins are projected to be in line with those for the current fiscal.

Campbell North America President Mark Alexander reported that based on unsuccessful efforts early in 2014 to increase sales by expanding investment in retailer price incentives and other promotions, the company will now be shifting some investment back into advertising.

Campbell, which reported combined, adjusted sales for continuing and discontinued operations of $8.58 billion for fiscal 2013 (up 11%), has set a goal of becoming a $10 billion, profitable company within the next five years.