Subaru is launching a new campaign for the new 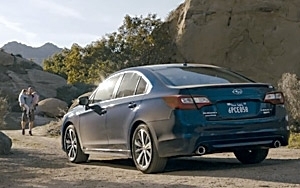 The effort adheres to Subaru's brand proposition that its cars are for a more — shall we say — enlightened crowd of hail fellows well met, whom one is  likely to encounter on the Appalachian Trail with his or her family (and the family lab at heel); at a transportation alternatives meeting; or at the local food coop.

The campaign, via AOR Carmichael Lynch, under Subaru's "Love" umbrella, includes three tier-one TV spots focused on Subaru's reliability, safety, capability and longevity, and the peace of mind they engender. An anthem spot says that we live in a world of passengers and then defines it from the Subaru perspective: a "red-eye" is a guy carrying his two exhausted kids back from a hiking excursion; "transfers" is a family picking up a puppy at the animal shelter.

One of the two 30-second ads touts Subaru's trademark all-wheel-drive feature. A kid asks his dad to fix his radio-controlled rally car, which had a wreck and is beyond repair, except that the axles still respond to the remote control. So he dad puts the broken car in the passenger seat of the Legacy and careers around a dirt patch, responding to his son's remote-controlled commands by looking at the toy's wheels turn left and right.

It's possible that the third spot is one that only Subaru could get away with. It acknowledges that the suburban driving life actually kind of sucks, something a little kid in a toy car realizes after his dad offers him the keys to his Legacy and suddenly he's a little kid driving his dad's Legacy, experiencing such commuting wonders as traffic jams, getting a ticket because he didn't put money in the meter, ("What's a meter?" he asks), and dealing with jerks in other cars. The spot manages to do this while touting the fact that the car will actually last until he's big enough to drive the real thing, though he realizes at the end of the ad that he'd prefer to stick with the toy.

The horrors of urban driving not withstanding, Subaru (which is a strong brand in the Northeast and anywhere there's snow) has been on a roll. Sales are up 16.3% year to date through June, which was Subaru's best June ever in the U.S. The sales numbers for Legacy is the only negative, but that's likely because of sell-down and people waiting for the new one. The brand reports Legacy sales down over 23% year to date.