It's All TV, Isn't It: A Rumination

I’m a TV guy, and proud of it. I enjoy horizontally watching a slew of my favorite professionally produced TV programs, surfing the electronic program guide, neurotically scanning my personal video recordings selections to ascertain future storage capacity, and fast-forwarding through advertising messages (though less so, recently) to see if I can accurately time the activation of “the play button” with the final second of the last commercial position in the pod preceding program content. And, selfishly, I admit, I rejoice in the $66 billion spent on TV advertising annually; remain unaffected by naysayers’ pronouncements about TV, the dying medium, and the 30-second commercial, a relic of the neo-Paleolithic media age. I eagerly await the ubiquitous deployment of advanced TV applications in the televisual realm: addressability (with interactive extensions), telescoping, intuitive navigation (encompassing all content, all the time, on-demand) and TV programmatic pragmatism coupled with more meaningful, manageable “big data.”

That’s me. So here is my question to you: Why the continued TV and digital video divide, though agencies religiously profess the shuttering of silos? A rumination or two:

At its inception, why did the online agency professionals insist on calling the video viewing experience in the broadband arena “video streaming?” Why didn’t they refer to it as television?” After all, TV is defined by Webster -- haven’t checked Wikipedia -- as “the transmission of video images.” In my opinion, had they utilized the timeworthy appellation, they would have more readily gained access to a greater share of the $66+ billion in TV ad revenue, made my job and that of other digital transitionists easier, and accelerated bridging the gulf between the two media to mutually share in the ability of the fundamental sight, sound and motion attributes of the video experience to engage the consumer.

I posit that had the media community -- traditional and digital -- gleaned lessons from its divisive video streaming christening experience, the digerati might have chosen a less complex nomenclature for TV programmatic, one that was not built upon the collision of foundations endemic to traditional TV and digital video.  The term “programmatic” in the digital sense is derived from a computeree’s concept of programming software and/or hardware: i.e., algorithmic conversations between 0s and 1s. To the contrary, the concept of “program” in the TV universe relates to context, as expressed in the dialogue and action within a set timeframe between animate objects, with terrestrial plots imposed for effect.  Both concepts heavily ensconced in their heritage. Both camps having difficulty extricating themselves from the past.

Historically, part of the cultural obstruction between the two communities lies in the line of demarcation drawn by the online community that unceremoniously labeled the traditional media community as “offline” -- kind of like the tail wagging the dog, albeit a very long, but nonetheless considerably smaller tail. Broadband video generates upwards of $4+ billion in the U.S. in ad spend compared to TV’s $66 billion. Not a pleasant way to encourage a fellowship between mature and burgeoning advertising sectors -- particularly when the mature/traditional community, via the media planner/account director, is often still the gatekeeper to allocation of ad budgets by medium.

The other half of the dilemma seems to reside in the traditional community’s need to disproportionately silo ad budgets to different distribution platforms, even when they fall within the same consumer experience. As an example, when a television viewer in New York City watches Channel 7 (an ABC station) via an over-the-air signal, we call it “broadcast.” Pretty simple. However, when a cable subscriber watches Channel 7, do we define the viewing experience as broadcast or cable? And when a satellite customer views Channel 7, is the experience broadcast, cable or satellite? And let’s not forget other platforms that contribute to this miasmic discussion: broadband publishers, mobile, telecos, apps, over-the-top devices, streaming video services, gaming consoles and of course, antenna-farmed Aereo -- oops, they are a cable system. Right.

I think that a positive step in encouraging a synergistic relationship between the two video cultures is best accomplished by at least delineating on paper real and imaginary differences: 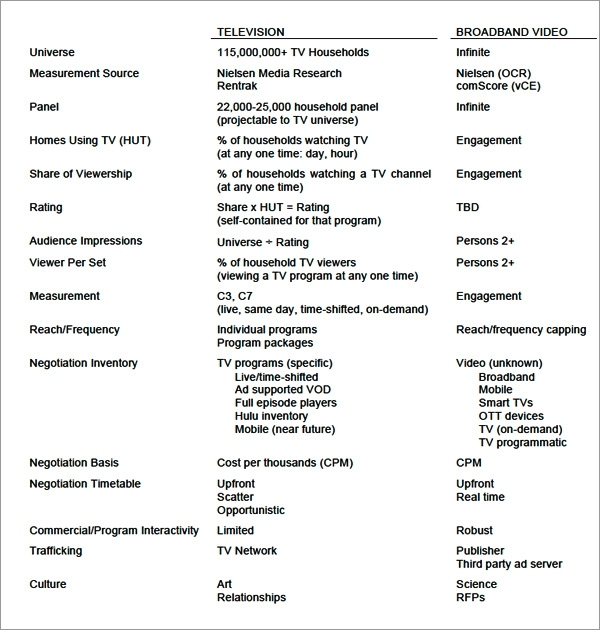 In closing, I would argue that to the consumer, it is all the same experience. It’s television. And if we, the ad community, both mature and burgeoning, are going to successfully engage the viewer of video -- whether it is via traditional television, broadband, over-the-top devices, streaming video services and/or mobile -- we must view it as TV as well, and utilize each platform’s individual attributes and applications to enhance our messaging capabilities in the service of our client’s goals.

media buying, programmatic, tv, video
8 comments about "It's All TV, Isn't It: A Rumination".
Check to receive email when comments are posted.
Read more comments >
Next story loading