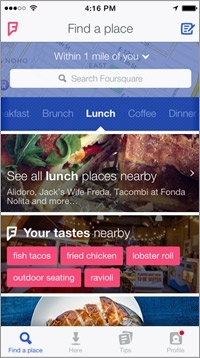 As part of a major reinvention, Foursquare unveiled its new local recommendation service, on Wednesday.

The preview follows Foursquare’s recent decision to divide itself into two distinct apps: a new app named Swarm that does what everyone associates with the Foursquare brand -- it allows users to check into physical locations and become the “mayor” of their local bar -- and another more Yelp-like service, which is taking the Foursquare name.

To distinguish itself from Yelp and other digital directories, the company baked personalization features into its new Foursquare app.

“In a couple weeks, we’re rolling out a brand new version of Foursquare that’s all about you,” the company explained in a blog post. “Tell us what you like, and we’ll be on the lookout for great places that match your tastes, wherever you are.”

The official Foursquare app is also getting a new logo, which is changing from the check-in checkmark to “a mix of [a] map pin and [a] superhero emblem. "This is the beginning of the ‘personalized local search’ future we’ve been talking about since we started Foursquare,” according to the company.

Foursquare, which popularized mobile check-ins and game-like features, is in the middle of a major turnaround.

Proving its obituaries premature, the company recently reported a revenue increase of about 600% in 2013. During the first quarter of 2014, year-over-year revenue growth was on track to exceed 500%, CEO Dennis Crowley said during a recent on-air interview with CNBC.

Web watchers have attributed Foursquare’s growth to a shift from reward-based friend-tracking to Yelp-like local business listings and reviews.

It was no surprise when Foursquare announced its plan to break the company into two separate apps.

Making Foursquare’s efforts to branch out all the more pressing, Facebook recently debuted an optional check-in featured named Nearby Friends. Given Facebook’s sheer size, the service represents an immediate threat to Foursquare, along with Google's Latitude service, and Apple's Find My Friends.

Foursquare is still in the process of moving all check-ins to Swarm, the company said on Wednesday.