It seems that movie companies aren’t the only ones interested in tracking an upcoming film’s buzz -- audiences are too.

Partnering with Nielsen, Twitter, in a recent study, says nearly a third -- 30% -- of Twitter users look for film information/trends a few months before movies appear in theaters, and another 20% seek film information a month or so before opening day.

Over 60% of all moviegoers go online or use mobile apps when it comes to tracking upcoming movies. When asked about the last movie they’d seen, 25% said they were influenced by seeing some advertising, a promo or a Tweet about those movies.

Just looking at Twitter users -- these numbers were much higher, 42%.

Almost 90% of Twitter users said what they saw on Twitter influenced their most recent movie choice, with 88% saying they took action upon seeing a tweet. From this, 44% proceeded to watch a movie trailer, and 41% tweeted or retweeted something about the movie.

The Nielsen/Twitter study said 32% of users are interested in seeing more special previews and trailers; 31% want tweets from the movie’s cast; and 27% are looking for behind-the-scenes videos and pictures.

Leaving a theater, 58% of Twitter users said they planned to share their thoughts about the movie online. 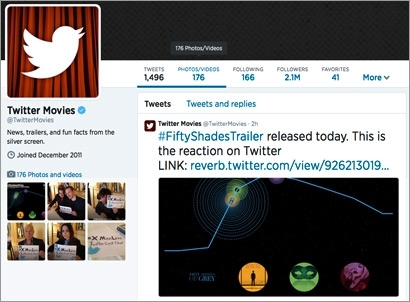