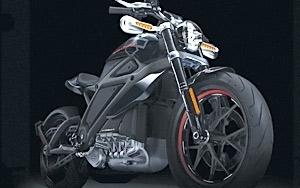 These days, if you want to get a message to consumers that your automotive products are futuristic or at least innovative, you pretty much have to get them into a Marvel movie, or any blockbuster with a superhero or two, or giant robots, and definitely a few Roman numerals in the title.

Luckily, Harley has an ongoing relationship with Marvel: most recently the Street 750, a brand new motorcycle platform that is just rolling into dealerships now. Street was in "Captain America: The Winter Soldier." Since Harley inked the deal in 2011, the brand has had its products in movies like "Captain America: The First Avenger"; "Avengers", where the company ran a promotion called "Assemble Your Freedom"; and "Iron Man 3" last year, where consumers could choose a Harley bike, and create a character to appear in a Marvel custom publication comic. For "Winter Soldier" Harley gave fans a chance to walk the red carpet.

But now, for the first time, Harley-Davidson will have a pure concept bike in a Marvel movie. The Project LiveWire electric motorcycle will be in "Avengers: Age of Ultron," which is about 10 months from showing up on theater marquees. The motorcycle will be ridden by  the Black Widow character, Natasha Romanoff, played by Scarlett Johansson. The Street 750 is also in the film.

In the real world, Harley has been taking a fleet of the electric bikes east to west on Route 66 making stops along the way to let enthusiasts ride them. The point is feedback. Whether or not the company keeps the project alive, perhaps toward production, depends to some extend on how badly consumers want them.

But at this stage, Project LiveWire is also a brand initiative to show how the company is not only a heritage brand but also an R&D leader.

The company, which announced the new Marvel movie integration at this week's huge Comic-Con convention in San Diego, is letting people ride the bikes at San Diego Harley-Davidson dealerships this weekend. As on the road trip, they are meant to provide feedback.

As for the Street 750 and smaller 500 sibling, Harley has been promoting the motorcycle to younger consumers at ESPN's X-Games in a somewhat guerrilla fashion, running its own ice and track racing events at or near the games.