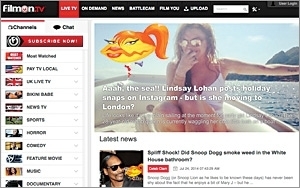 A federal judge in Manhattan held FilmOn in contempt and fined it $90,000 for continuing to stream television shows after the Supreme Court ruled that Aereo's similar streaming service infringed broadcasters' copyright.

“For nearly two weeks, FilmOn was aware that its operations, based on the Supreme Court’s determination, infringed plaintiffs’ copyrights, yet defendant continued to purposefully broadcast content within the Second Circuit until it got caught,” U.S. District Court Judge Naomi Reice Buchwald wrote in an order made public on Friday.

Buchwald's decision wasn't a surprise. At a hearing this week, she said FilmOn should have stopped streaming broadcasters' programs as soon as the Supreme Court reversed a pro-Aereo decision issued by the 2nd Circuit Court of Appeals. Instead, FilmOn continued to stream major broadcasters' over-the-air programs to New Yorkers' smartphones and tablets until around July 8. By contrast, Aereo suspended its service soon after the ruling.

Buchwald fined FilmOn $10,000 for each day the company streamed shows after June 28 -- which was the day that Aereo ceased operations.

“FilmOn’s rights and responsibilities in this Circuit are tethered to those of Aereo, as both companies employed the same mini-antenna technology to broadcast the networks’ programming. Consequently, it is reasonable to assume that FilmOn would follow Aereo’s lead in responding to the Aereo decision,” she wrote. “Aereo did not suspend its operations until June 28, 2014, and we believe it would be unfair to hold FilmOn in contempt for continuing to stream content when Aereo ... continued to do so itself.”

FilmOn has been held in contempt on two previous occasions for violating court orders in lawsuits brought by broadcasters. Buchwald referenced those findings in her written opinion. “FilmOn has demonstrated a repeated willingness to flout the authority of the federal judiciary, and it is essential for this Court to make clear the obvious: the injunction and the judgment are not mere suggestions, but are orders that demand compliance,” she wrote.

The contempt ruling is the latest twist in a 2010 lawsuit brought by broadcasters against FilmOn. That case resulted in an injunction prohibiting FilmOn from infringing broadcasters' copyrights.

Until the Supreme Court ruled against Aereo, FilmOn X took the position that wasn't infringing television broadcasters' copyrights, due to the multiple antenna system, which streamed shows on an antenna-to-user basis. FilmOn X, like Aereo, argued that it wasn't “publicly performing” television shows, given the one-to-one nature of the streams.

The Supreme Court rejected that argument in the Aereo case, ruling that the company resembled a cable system and therefore couldn't transmit television shows without a license.

After that ruling, FilmOn revised its position. The company now argues that it isn't infringing copyright because it's a “cable system” and entitled to a compulsory license.

But Buchwald said in her order that FilmOn “attaches far too much importance to the Court’s analogizing.” She adds: “A series of statements that Aereo (and, by extension, FilmOn) ... is very similar to a cable system is not the same as a judicial finding that Aereo and its technological peers are, in fact, cable companies entitled to retransmission licenses.”