Horizon Fuels Creativity with The 'United State Of Story' 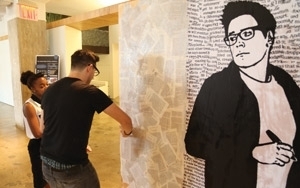 Inspiration can come from anywhere, from Chef Dominique Ansel's croissant-doughnut mashup, “the Cronut” to tactics that turn awkward elevator banter into entertaining comedy.

In an era of big data and bigger PowerPoint decks, it’s not always easy to weave in great storytelling, say Horizon Media executives. What has stood the test of time, though, is the creative spark that makes a story interesting and worth sharing -- something that can get lost amongst the daily hustle and bustle of the media world.

Now, to inspire its employees to re-ignite that creative spark, Horizon Media created "The United State of Story" series that invites people from the world of cinema, photojournalism, comedy, art, and the culinary world to come and share their stories, their creative processes and their personal opinions on communicating effectively.

"We wanted to seek inspiration from the people we felt had a great story to tell," says Stephen Hall, CMO, Horizon Media. "People communicate and share their passions in so many different ways, so we thought wouldn’t it be great if we could learn from all those diverse forms of self-expression. This isn't about dry words on a power-point slide."

Thus far, more than 300 of Horizon's 700 employees have participated in these free morning sessions. "That isn't too bad considering the logistics of a busy office," says Hall.

"Initially we developed a wish list of people we wanted," says Hall. "We then made numerous calls and tried coordinating schedules. Naturally, you get a few no’s, but we were overwhelmed by how generous everybody was in willing to take time out of their busy schedules to share their passion and skills with us."

Looking forward, Horizon plans on hosting at least one session a month, and is in the process of developing another wish-list of potential speakers. "We have a number of comprehensive and ongoing educational programs for our people covering all manner of business, finance, creative, health and wellness areas," says Hall. "The United State of Story falls into the creative category but also has business benefits. We all work hard so it’s nice to change the pace, have some fun and also learn a little.

"
agency, creative
1 comment about "Horizon Fuels Creativity with The 'United State Of Story'".
Check to receive email when comments are posted.
Next story loading