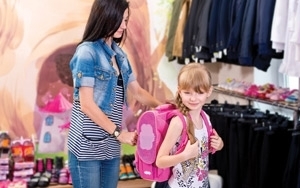 As parents tiptoe toward the start of a new school year, it looks like they are rethinking their back-to-school strategies. Webrooming and online price comparisons may be more important than ever, but physical stores are playing a more pivotal role.

A new survey from Accenture, the global management consultant, reports that 89% of parents of kids K through college plan to do most of their shopping in stores this year, says Dave Richards, managing director of Accenture's Global Retail practice. And a forecast just released by Deloitte says that while online shopping has moved into second place in its survey for the first time (just behind discount chains like Walmart and Target, and tied with office supplies stores), 57% intend to research products online before buying them in stores. And 40% of those in the Deloitte survey say they prefer to purchase from stores that allow them to pick up online orders in stores.

Those trends indicate that as consumers become more expert at navigating various retail channels, retailers are bumping their way toward offering more seamless ways for them to do so. “The primary reasons for this webrooming are to check if an item is in stock, to actually see the product before buying it, and to avoid shipping costs,” he says.

He also tells Marketing Daily that value and price are big concerns. “While we’re predicting an increase in spending, it’s a forced one, due either to the increased cost of goods or demands from the school. And we certainly saw a bifurcation of consumers. There are those who are able to spend more, and those who aren’t, just because of challenges in the family budget.”

Accenture reports that 67% of parents intend to spend between $100 and $500 and 41% say they expect to spend $500 or more. Discount/mass retailers are the overwhelming favorites, with 90% planning to shop at such stores.

Deloitte’s survey also digs into parental concerns, and finds that families are somewhat less fearful about the economy than in recent years. Its survey finds that families with kids in grades K through 12 intend to spend $543 on back-to-school items, and more than double that amount, at $1,223, on college-age offspring. (That includes kids’ contribution of an average $436 before heading back to campus, compared with last year’s survey. Children in grades K through 12 are expected to contribute a smaller amount, at $173.)

Instead, the poll finds that online security is a big worry, with 55% saying they are more concerned about their data when shopping online.

"Back to School shopping" photo from Shutterstock.