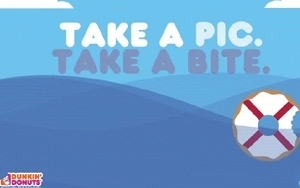 Dunkin' Donuts has partnered with the Discovery Channel on a multi-element marketing campaign for the network's hugely popular "Shark Week," which this year begins Aug. 10.

Dunkin' is already using its social media assets to promote a "Take a Bite, Take a Pic" contest. Consumers 18 and older who take selfies while they're taking a bite out of their favorite breakfast items and share them on Twitter or Instagram with the hashtag #DDSharkWeek earn chances to win prizes, including a$100 Dunkin' Donuts card and a "Shark Week" prize pack.

Participants may also be featured on Discovery's "Shark After Dark," a late-night, shark-themed talk show hosted by comedian Josh Wolf. Each night during the show, Wolf will encourage viewers to visit SharkWeek.com/Dunkin to vote for the "Dunkin' Bite of the Nite." Winners will be announced and their photos revealed on the show. The winning photos also may be featured on Dunkin's Times Square billboard in New York.

Dunkin' and Discovery are also offering an interactive TV experience, designed by Dunkin' agency of record Hill Holliday, on Microsoft's Xbox One entertainment system. Consumers watching "Shark Week" through their Xbox One can snap their Internet Explorer browser window to the edge of their TV screens to provide a simultaneous live feed of social content, interactive quizzes, real-time polls and other content related to the week's shows.

According to Hill Holliday VP director of experience design Jamie Scheu, this marks the first time that a paid advertiser has created an Xbox One interactive experience for live TV programming.

For Dunkin',  this creates "an opportunity for sustained engagement with people in their living rooms — not just for 15 or 30 seconds at a time during commercial breaks, but for minutes or even hours throughout a live national television event," Scheu added.