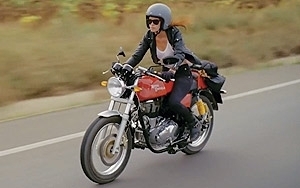 Rod Copes, the brand new North American president of India-based motorcycle brand Royal Enfield, rode along with reporters who took the company’s new Continental GT classic motorcycle for a ride along the Hudson River recently, riding twisties along the Palisades and meandering country roads near New Paltz. Reporters were enthusiastic about the 535-cc bikes, as were onlookers, who gawked at its retro cafe racer stylings.

But will American 20-something urbanites like the purist's machine? Copes, who came to the brand from a global marketing position at Harley-Davidson, talks to Marketing Daily about what brought him to the brand and how he'll bring the new bike to the U.S., now that the company has a big plant in Oragadam, India, which will lift global capacity to 250,000 bikes.

Q: How long have you been at Royal Enfield?

A: It will be a week tomorrow. I left Harley-Davidson in late 2012 after a 20-year run. I decided it was time to take a sabbatical and then got involved in some startups, then reconnected with Siddhartha [Lal, CEO of Royal Enfield Motorcycles owner Eicher Motors Ltd ] and one thing led to another.

Q: How did you meet him in the first place?

A: In 2007, I was given responsibility for the Asia-Pacific region for Harley-Davidson. At that time we did not have a presence in India, so before we established a strategy there, we made several trips. [Lal] explained the Indian market for motorcycles to us, and even opened his production to us, and we visited many times. At one point we talked about fusing something together as two different companies. We both decided not to, but [he and I] established a relationship and friendship that has continued since then.

Q: When you left Harley, had you planned on leaving the industry?

A: I figured I was done with motorcycles. After working with a great brand like Harley I figured where else could I go? And I never really thought about going back until Siddhartha and I talked. When he mentioned an opportunity, I felt it was the only other motorcycle brand I could really go with.

Q: Who will buy this motorcycle? I think I heard that the age group would be 40 to 50.

A: The average age of Harley is up in the 40's range. And that is where a lot of the motorcycle market in the U.S. is today. But I do think the young adult market and demographic is perfect for us. For them it's about pure motorcycling and the essence of a motorcycle. This is the new youth urban generation and they suit this brand and motorcycle really well.

Q: Is there a space in the product segmentation?

A: There is a gap in the market. There's not much in the middleweight standard, classic motorcycle area. I have talked to some industry experts and they have said there just aren't a lot of sales in the 400-cc to 500-cc range, but that's changing. There is this emerging middleweight motorcycle market. And to reach the next generation of riders, bikes of this size are critical. Also, when we launched Harley in India the smallest bike we had was 800 cc's, which was the size of some cars there, so there is also a market around the world.

Q: You mentioned retail footprint. Does that mean Royal Enfield will have urban stores?

A: We just opened a flagship London, an urban setting. It's a small storefront but with classic design, and apparently initial sales are showing real good results, so that's an approach which is different than lots of [motorcycle] brands in the U.S. Most don't have dealers in an urban setting, but if that's the customer you're reaching how do you do that and still make it financially viable for dealer to make money? That's what we have to look at.

Q: Royal Enfield has been selling motorcycles in the U.S. for a while now. Is this essentially a relaunch of the brand in the U.S?

A: I think that's one way of looking at it. Kevin Mahoney, who is our distributor in the U.S., has been doing the business for almost 15 years. We have 100 dealers here, but we think it's an opportune time with the new Continental GT and our improved manufacturing to go more aggressively in the U.S. So, yes, we are committing to investing more money in the brand and establishing a bigger dealer network.