Retargeting On Facebook: Mobile Gives More Bang For The Buck

Much has been made of Facebook’s success with mobile ads -- they helped the social network boost revenue by 61% year-over-year -- and AdRoll, a retargeting firm, has released new data about retargeting on Facebook that further highlights the importance of mobile.

The data comes from over 800 million impressions from 215 different advertisers that AdRoll collected over a three month period. The retargeting campaigns ran on the Facebook Exchange (desktop), Facebook WCA (mobile) and Web sources other than Facebook. 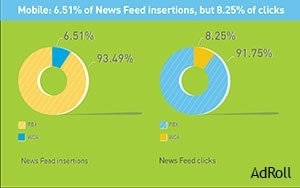 The data is significant because it backs the argument that Facebook may continue keeping its mobile inventory off the FBX. The data doesn’t suggest that mobile is the only way to go, though. It says that a mixture of desktop and mobile retargeting increases campaign effectiveness across the board.

Advertisers increase clicks by 53% when adding Facebook Newsfeed campaigns on existing desktop campaigns despite adding only 5.7% more impressions. When adding mobile retargeting on top of that, clicks jump an additional 29%.

AdRoll's report can be found here.