In what may be the most ironic development since Madison Avenue began trading audiences the way Wall Street pros trade commodities and equities, agencies and their trading desks can now buy and sell Wall Street traders.

In a deal announced Tuesday, Targeted Victory, a data management platform (DMP) specializing in political media campaigns, said it is licensing data from Dean Media Group that will enable it to target online users who are financial professionals, including Wall Street traders.

Targeted Victory said the data, which is derived from financial website publishers, will enable it to target Wall Street pros based on what types of financial instruments they trade, including stocks, bonds, commodities, etc. (see table below).

“We are really excited about this and think that it is a data set that could have a direct application to politics,” explained Michael Beach, who co-founded Targeted Victory in 2009 to help Republican candidates leverage the kind of digital data that contributed to the success of the 2008 and 2012 Obama campaigns.

While Wall Street traders might seem like a niche for many broader reach campaigns, he said they could be an incredibly influential target for the right message or campaign strategy.

“For example, there could be some type of issue (capital gains taxes, etc) that is normally too niche for a broadcast message,” he explained, adding, “Now we can run an advertising program directly to voters that are interested in that issue.”

Beach said having the ability to identify, target and reach the Wall Street crowd is only half the battle. The other half, he said, is figuring out the right campaign to serve them.

“It is going to take a huge shift in creative thinking because we are so accustomed to the generic message that runs on broadcast television,” he explained, paraphrasing his partner Zac Moffatt to illustrate that point. 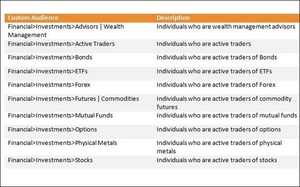 “Zac always says that we are data rich and content poor and this is a perfect example of that,” he said.

How the data could be applied for marketing other products and services isn’t clear, but the Dean database, dubbed FinancialAudiences, boasts 30 million unique profiles.