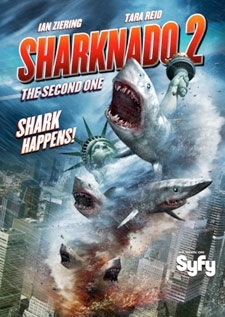 Editor's Note: Tonight at 9 p.m. ET, Syfy will premiere the most eagerly anticipated movie sequel of the year, "Sharknado 2: The Second One." The Syfy marketing, promotion and publicity machines have been in overdrive priming fans for tonight's big show -- arguably one of the top television events of the summer. Last year, in the weeks leading up to the premiere of the first "Sharknado," that wasn't the case. As the world prepares for "Sharknado 2," here's a look back at the initial excitement surrounding the franchise one year ago. It was the Summer of "Sharknado."

Almost 40 years after the summer of “Jaws,” shark-mania is once again permeating popular culture thanks to the low-budget, high-impact Syfy movie “Sharknado.” Fueled by a record-breaking (for Syfy) number of tweets, if not by ratings, this may be the first entertainment phenomenon that owes more to the excitement it generated on Twitter than to actual viewer interest on television.

Before its July 11 premiere, nobody had heard of this silly flick about a tornado that flings man-eating sharks that seem not to be troubled by a lack of life-giving salt water onto the streets of Los Angeles and the CGI feeding frenzy that ensues. Awareness of and anticipation for this film were near absolute zero. But during its first telecast, Twitter blew up, as they say, inspiring almost a half-million tweets, in part because geek lord Damon Lindelof happened upon the movie and couldn’t resist tweeting his thoughts.  Other celebrities, including former “Walking Dead” executive producer Glen Mazzara, CNN anchor and correspondent Jake Tapper, “Arrow” Executive Producer Greg Berlanti, “Pretty Little Liars” co-star Chad Lowe and “The Hunger Games” star Elizabeth Banks joined in the fun, turning a movie that few people watched even by Syfy standards into one for the history books. The best tweet, in my opinion, came from “The Office” star B.J. Novak, who said, “I’m afraid that now when we have a real sharknado everyone’s going to treat it like a joke.”

Well, “Sharknado” is no joke. I have spent the last two weeks at the San Diego Comic-Con and the Summer 2013 Television Critics Association tour, and almost everyone I have encountered, from media executives to ordinary civilians, has had something to say about the movie -- whether they have seen it or not. At both events, studios and networks events spent small fortunes promoting “serious” and “important” properties, and while they have generally succeeded at doing so, they haven’t trumped the buzz surrounding “Sharknado” -- which, tellingly, Syfy spent almost nothing on before its premiere.

At first, reporters and media experts dismissed the impact of Twitter in making “Sharknado” a household name because its ratings weren’t very impressive and it wasn’t contributing much to Syfy’s bottom line. (In point of fact, many other Syfy original movies have earned much better numbers.) Some wondered why the Disney Channel’s “Teen Beach Movie” -- which debuted on July 19 and attracted a hefty 8.4 million viewers that night -- wasn’t generating similar buzz.

But consider what has happened during the last few weeks. Repeat telecasts of “Sharknado” were scheduled with impressive results: After attracting 1.4 million viewers on July 11, it was watched by 1.9 million people on July 18 and by 2.1 million total viewers on Saturday, July 27. Of course, Twitter may have kicked off the phenomenon, but it can’t be credited with keeping it going or with its subsequent growth. That has come about as a result of marketing and publicity -- and most importantly, word of mouth, spread not only through social media but by direct person-to-person communication, to say nothing of press coverage.

The timing of all of this was, in a word, bizarro -- in that “Sharknado” became a sudden sensation just a week before the start of Comic-Con, and Syfy hadn’t planned to so much as mention it at the annual marketing and promotion extravaganza, which happens to be the biggest science-fiction and genre gathering on the planet. (I have always recommended that Syfy do more to promote its low-budget movie franchise at the Con, which is ground zero for fans of such stuff, but what do I know?) Instead, the network put all its promotional power behind more serious projects, like the second season of its adventure series-video game hybrid “Defiance,” the upcoming series finale of its popular “Warehouse 13,” and the premiere next year of what it hopes will be its next big important franchise, a scripted series about the spread of a deadly disease titled “Helix.”

Plainly, executives at Syfy don’t want their brand to become synonymous with cheap cheese like “Sharknado.” Indeed, the network has consistently put forth much loftier messages about its mission statement that aren’t consistent with low-end entertainment. But what is a network to do when one of its programs is suddenly bigger than it is? Syfy has moved with lightning speed to strike while “Sharknado” is hot, instantly ordering a sequel and mobilizing a team of street marketers to work the streets of San Diego during the Con, urging nerds by the thousands to enter a contest via Twitter and submit ideas for the sequel’s title.

In a real stretch, “Sharknado” will play on more than 200 movie screens at midnight tonight. (I can’t help but wonder what those cheap CGI effects will look like in a theater.) This is an unprecedented afterlife extension for a Syfy flick. Meantime, on Wednesday Syfy and The Asylum (the production company that made “Sharknado”) announced a merchandising program with direct-to-retail and brand licensing agency Earthbound LLC, promising a plethora of “Sharknado” stuff in the weeks to come, including T-shirts, bags, costumes and video games.